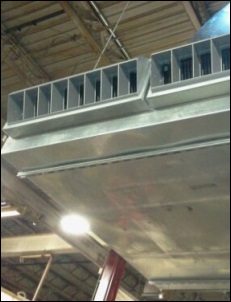 by Brianna Crandall — November 14, 2014—The U.S. Department of Energy recognized Cummins Inc. last week for demonstrating leadership in reducing energy use and costs at its Jamestown Engine Plant in Jamestown, New York. Through DOE’s Better Plants Challenge, Cummins committed to a 25% reduction in energy intensity by 2016 across 104 facilities, including 19 plants covering more than 8 million square feet.

Cummins has already achieved its goal with a cumulative energy intensity reduction of 34%, and the company’s efforts in Jamestown are expected to reduce the plant’s energy intensity by a third — resulting in energy savings of approximately 250 billion British thermal units (BTUs) and also saving the company nearly $1.4 million in energy bills.

The Jamestown Engine Plant has been undergoing its largest infrastructure upgrade in more than 40 years. With the new upgrades, critical equipment has been updated, leading to increased energy efficiency, as well as greater reliability and operational stability. The company proceeded with a phased, whole-building energy and infrastructure improvement project—setting aside $5.1 million specifically for energy efficiency projects.

As a part of this approach, Cummins implemented a number of varied projects, installing energy-efficient lighting and a new thermal insulated roof with solar panels, while also upgrading the heating and cooling system and the energy control system. The new 2-megawatt solar installation is capable of generating about a third of the plant’s power on the sunniest days, and the company is also almost entirely eliminating the use of steam at the plant — replacing it with direct-fired gas units and new cooling equipment that will save about 4 million gallons of water annually.

The plant has installed three regenerative dynamometers that recover energy from engine testing and provide power to the facility. In addition, other improvements and upgrades make the plant the first Cummins site to achieve zero-waste-to-landfill status. Cummins credits “strategic thinking, rigorous financial analysis and planning, and strong leadership” for the successful upgrades.

A cornerstone of President Obama’s Climate Action Plan, the Better Buildings Challenge supports the goal of doubling American energy productivity by 2030 while motivating corporate and public sector leaders across the country to save energy through commitments and investments.

More than 200 organizations are partnering with DOE to achieve 20% portfolio-wide energy savings and share successful strategies that maximize efficiency over the next decade. Across the country, Better Buildings Challenge partners are reportedly deploying energy efficiency projects at more than 9,000 facilities, with more than 2,100 buildings improving efficiency by least 20%, and another 4,500 by at least 10%, compared with their baseline years.