At a recent hearing, public officials, building and business owners, developers and residents in Westchester County, NY, voiced concerns over a move by utility company Con Edison to stem natural gas use.

The utility declared a moratorium on the new use of natural gas, which took effect on March 15, 2019.  This is the result of significant growth in the area, paired with the inability to expand natural gas piping and infrastructure throughout most of the county.  Many are concerned about potential economic fallout as a result, with facility managers and developers left scrambling to find alternative heating solutions for ongoing and future projects. 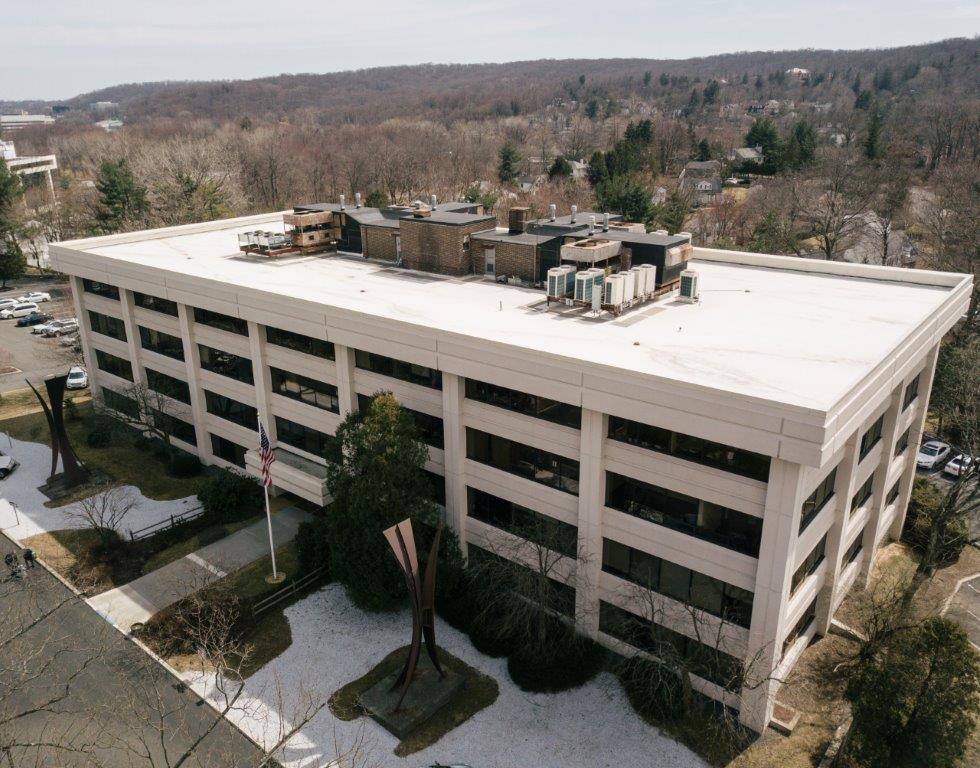 Based on its viability and energy efficiency for large scale projects, a VRF (variable refrigerant flow) heat pump system combined with a high-efficiency ERV (enthalpy recovery ventilation) system was recently selected by a large property management company for its 71,000 square-foot headquarters in Tarrytown, NY, as an upgrade to its existing HVAC system — four, 60-ton, multi-zone, natural gas-fired rooftop units.

The original rooftop units with dual-deck air handling system had been serving the four-story, shared-space office facility for 47 years. They were inefficient by today’s standards, and have required substantial maintenance and ongoing component replacement.

Blend Air Mechanical Corp. has served the management company for more than 20 years, handling the mechanical work at many of its locations.  It became apparent several years ago that the building in Tarrytown would soon need new HVAC equipment.

While comparing options, Blend Air looked first at like-to-like replacement with new rooftop units.  While this would have curtailed energy use to some extent, it left much to be desired in regard to redundancy, zoning and comfort improvement.  An in-kind retrofit would have been nearly impossible to execute without displacing building occupants, and would have meant continued reliance on natural gas for space heating.

We began looking at VRF heat pump systems and had serious discussions with two major manufacturers of that equipment.  On a retrofit of this size, I needed assurance that we’d receive design, installation and continuing support.  Neither of those manufacturers gave me that confidence, and basically left us to figure out all the design and installation details on our own.  That’s when managers from Fujitsu approached me.

Tom Carney, national sales director at Fujitsu General America, learned of the project and introduced Grossman to Umair Surani, one of Fujitsu’s sales engineers.  Surani and Grossman visited the project for an in-depth look at the building’s needs and challenges.  In addition to mini-split heat pumps and a variety of commercial Airstage VRF products, Fujitsu manufactures heat recovery VRF systems, which allow load-sharing and simultaneous heating and cooling throughout a building.  This was critical for the project in Tarrytown.

There were two big takeaways from my meeting with Umair.  The first was that Fujitsu had the exact HVAC solution my customer needed.  The second was that they could provide a true support team.  Between Fujitsu, Ventacity, distributor Johnstone Supply, and their rep firm, Wales Darby, I felt confident that all bases were covered.  Umair immediately began the process of submitting Con Ed paperwork for potential rebates, and Fujitsu hired a third-party consulting engineer to conduct an energy analysis.

As part of the energy analysis, Blend Air installed a single Airstage VRF system to condition a small part of the building.  Its real-world performance was one of many factors considered in the assessment. 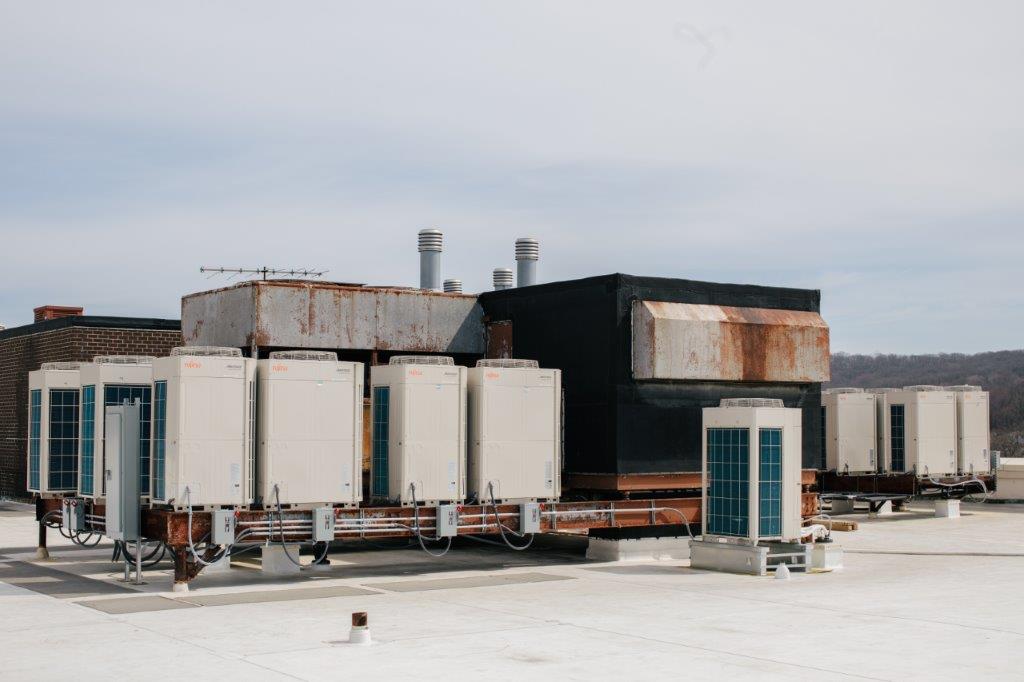 Fujitsu heat recovery Airstage VRF systems provide an estimated annual energy savings of $62,000, and qualify for a $133,000 rebate from the local utility. Image courtesy of Fujitsu

It was found that the VRF/ERV system would provide annual electricity and natural gas savings over the existing system of 224,000 kWh and 38,800 therms, respectively.  This yields a $62,000 annual cost reduction.  Compared to new code minimum efficiency equipment, the proposed VRF/ERV system would reduce energy consumption by 181,000 kWh and 29,000 therms, or about $46,000 annually.

The energy savings itself are impressive, but the new system would also curtail on-peak electric demand.  Heating and cooling demand for exterior rooms in the building fluctuates throughout the day and the year, but the interior spaces call for cooling almost constantly.

The cost increase for the VRF/ERV system over the code minimum system is only 9.6 percent after consideration of applicable utility rebates.  As a result, the payback for upgrading from a code minimum system to the VRF/DOAS system is realized in just three years.  After the energy findings were considered, the customer fast-tracked the project.

The customer identified two main criteria for this project beyond reduced energy use.  Building occupants must not be disturbed or displaced at any point, and the owner wanted a system with more condensing units and compressors.  This way, if a unit went down for any reason, the vast majority of the facility would still have space conditioning. 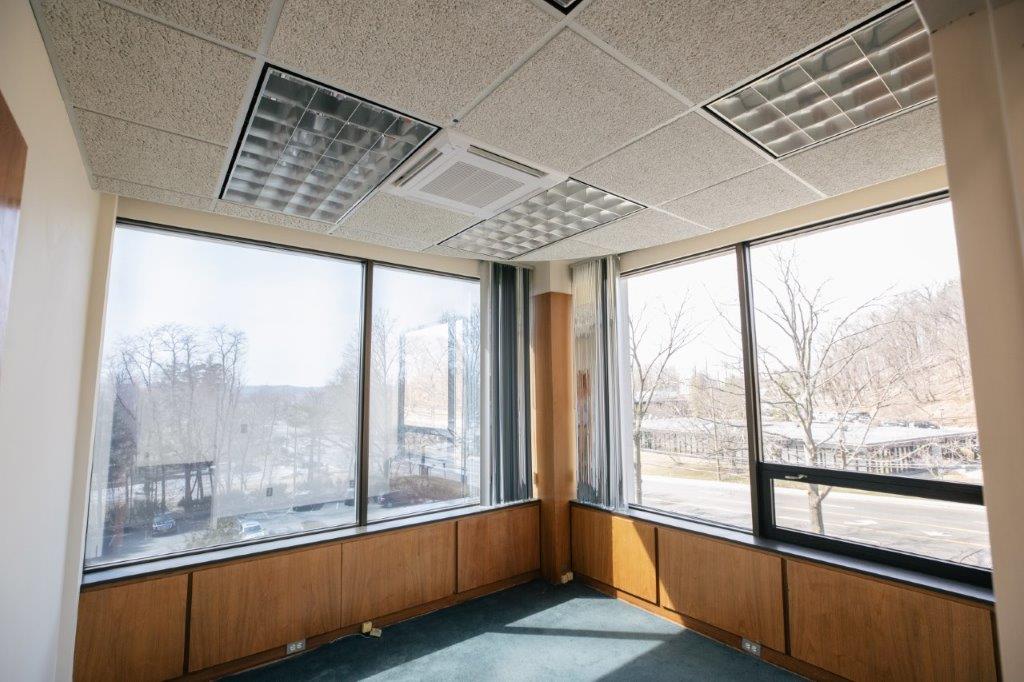 Because the office building was originally served by four large rooftop units, mechanical work could take place independently in two phases.  One half of the building was to receive new VRF systems immediately, and the second half is to be completed later in 2019.

Blend Air began installing the new Fujitsu Airstage VRF systems in December of 2018.  This consisted of placing medium and high-static air handlers in existing ductwork, and installing ceiling cassette evaporators where new, smaller zones were to be added.  This occurred in spaces with unique, volatile loads, such as corner offices and conference rooms.

The building was 98 percent occupied, mostly by physicians’ offices.  To avoid disruption, all indoor work took place at night or over weekends.  Outdoor work was conducted during regular hours.  Minimal cooling was needed over the winter, permitting removal of the existing rooftop unit’s condensers.  The cooling load was temporarily met by blending cold outdoor air with return air.  The new VRF condensing units were installed on existing dunnage.

VRF air handlers were installed in existing ductwork in a manner that shortened the existing duct runs.  This, in itself, greatly reduced energy loss across the ducted systems.

In all, phase one included 16 Airstage VRF condensing units, paired into eight individual systems totaling 128 tons.  These serve 61 indoor units, ranging from 7,000 to 36,000 Btuh each.  On March 2, the new system was commissioned and the existing rooftop unit was taken offline.

When phase two is complete in late 2019, the building will have 32 VRF units totaling 16 systems, with 109 zones of heating and cooling, up from 48 zones.

More zones within the building leads to better comfort levels throughout.  It also provides more accurate control to individual spaces.  Corner offices are no longer cold in the winter and hot in the summer.  Conference rooms, when fully occupied, are not hot and humid, and can be set back for greater efficiency when not in use.  The property owner now has remote access to the system at all times. 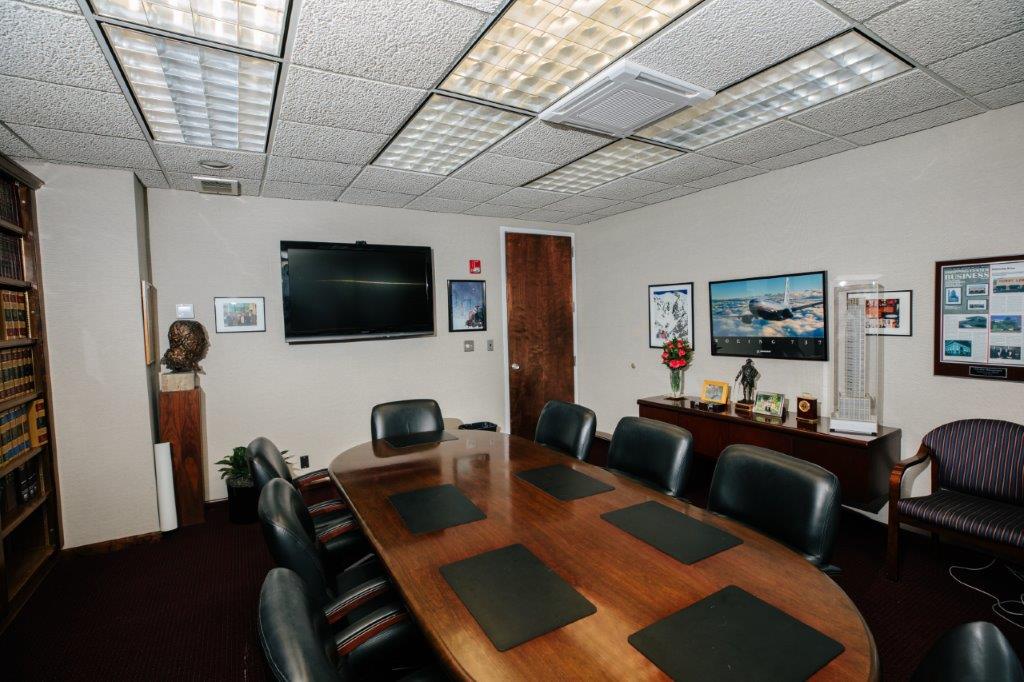 There have been no comfort complaints since the new system was implemented, and tenants are quick to let us know if they’re uncomfortable.  The support team addressed each of our concerns and has been there every step of the way to help Blend Air.  Fujitsu has exhibited by far the most professionalism of all the manufacturers we’ve engaged on this project.

We’ve provided my customer with peace of mind knowing that if a single unit goes down, only a few zones cease operation, instead of half the building.  And, there’s cost savings beyond efficiency, too.  The owner is looking to save somewhere in the neighborhood of $70,000 in repair and maintenance costs in the first year.

Thanks to Surani’s diligence in pursuing incentives for the project, the owner will receive a $133,000 rebate from Con Ed when the project is complete at the end of the year.  Electric use numbers were collected through the months of April, May and June and compared to the previous year. Already, with only half of the building converted, average electric savings per month total $12,500.

Fujitsu General America is a provider of heating and cooling solutions for every application, backed by the finest service, support, training and programs for the United States and Canada. The company’s high-efficiency, eco-friendly AIRSTAGE mini-split and VRF systems provide advanced comfort solutions for residential and commercial applications. Fujitsu also offers a full line of central air conditioners, heat pumps and gas furnaces to round out the collection of residential and commercial heating and cooling systems.

Fujitsu General America is based in Pine Brook, NJ, and its solution center, Airstage on Broadway, sits in a penthouse suite in Times Square, New York. FGA is a wholly owned subsidiary of Fujitsu General Limited, which is listed on the Tokyo Stock Exchange and headquartered in Kawasaki, Japan, with over 8,400 employees worldwide.

* This article is written by Fujitsu General America; FMLink is not responsible for the accuracy of its content. Should anyone wish to contact FMLink regarding any article, please e-mail FMLink at contact@fmlink.com.