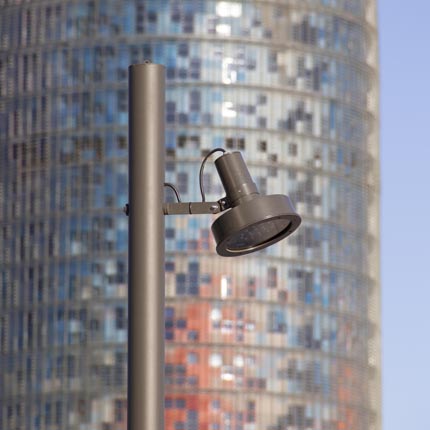 “New technologies and materials led Urbidermis Santa & Cole to take a fresh look at Arne and Rama lights,” said Landscape Forms Lighting President Jordan Agustin. The company reengineered the classic fixtures, adding distributions, color temperatures, and LED outputs. “From the inside to the outside, Arne and Rama have been updated to improve performance,” continued Agustin.

The updates to Rama and Arne speak to Urbidermis Santa & Cole’s philosophy of designing products for outdoor spaces that have a timelessness and longevity in both function and design. New technologies and materials improve the lights’ performance and durability. We’ve also made changes to simplify installation and maintenance.

Rama’s head includes an interior compartment, easily accessed by an installer, that houses electronics and reserves space for the addition of sensors and controls. A redesigned bracket system adapts to any mount or surface. 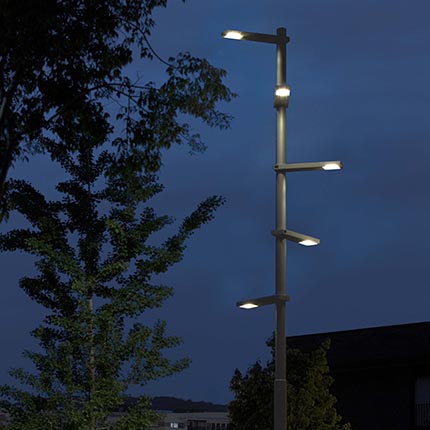 Attachment brackets on Arne have been redesigned to also ease installation. The LED arrays in both products have been updated with a modernized design.

The Arne indirect light has a new design and mounting and distribution options. Now mounted to the side of a pole, the indirect light more closely resembles the other Arne pole-mounted fixtures.

Arne’s classic simplicity and Rama’s distinctive linear form remain the strong statements in the updated luminaires. “These enhancements modernize the best-selling designs and make an excellent product that much better,” said Agustin.

Urbidermis Santa & Cole has a strong design pedigree. It brings a uniquely European aesthetic to our offering, and its partnerships with industrial designers from around the world enhance the products we offer our North American customers.

Arne was inspired by Danish architect and designer Arne Jacobsen, and Rama was designed by Spanish industrial designer Gonzalo Milá.

For more information about the Arne and Rama outdoor lights, see the Urbidermis Santa & Cole collection on the Landscape Forms website. Kalamazoo, Michigan-based Landscape Forms has an installed base of products around the world.

See how you can reinforce your disinfection efforts with Current’s always-on germicidal UVC lighting October 2, 2020 In "Products and Services » Lighting"

For recessed lighting, look for these canless downlights with a choice of three wattages and emergency backup March 24, 2021 In "Products and Services » Lighting"

Replace your T8 fluorescent tube lights with or without a ballast bypass, with these dual-mode LEDs May 12, 2021 In "Products and Services » Lighting"