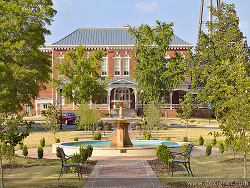 by Shane Henson — June 27, 2011—A dormant 40-acre college campus—which lay vacant for more than 10 years—has been given a new life as the headquarters and training academy for the Georgia Department of Corrections (GDC).

The campus, located 65 miles south of Atlanta and now called the State Offices South at Tift College, opened last fall after four years of research, planning, infrastructure upgrades and the full rehabilitation of 13 structures. The massive renovation and adaptive reuse project, which encompassed 225,000 square feet, was led by the architecture firm Lord, Aeck & Sargent in a collaboration of its Education and Historic Preservation design studios.

The college was founded in 1849 as the Forsyth Female Collegiate Institute and later became known as Tift College. In 1986, the college merged with Mercer University, and its campus, a portion of which is listed on the National Register of Historic places, was left vacant. Given the historical relevance of the campus, Joe Greco, president of Lord, Aeck & Sargent and project principal, said the company’s overriding design strategy was to preserve and enhance the historic character of the campus while providing the GDC with functional, practical buildings for a new use.

In carrying out its strategy, the design team faced a number of challenges, says Christine Ray, who served as the firm’s project manager. She says one challenge was that the Tift buildings are small relative to today’s modern college campus facilities, so the team had to determine how they could make them effective for the GDC’s needs. The complexity of rehabilitating structures from so many different eras and also addressing compliance with the Americans with Disabilities Act was also a challenge, she added.

Ray further noted that each rehabilitated building merited its own treatment approach. For example, Ponder Hall, the oldest building on campus, dated from 1883 and required a respectful approach. Over the years, the building had undergone a number of unsympathetic renovations as well as expansions on either side of the main structure. The second story, once a chapel and auditorium, had been subdivided into small classrooms. Lord, Aeck & Sargent’s design brought the second floor back to its original appearance, removing non-historic interior walls and restoring original plaster walls and trim. The GDC now uses it as open office space.

Forty-six million dollars of the project cost was funded by the Georgia State Legislature. However, Greco noted that total costs were held down as the result of the contributions of several entities, which if counted would likely bring the true commercial value to more than $60 million. As a cost-saving measure, GDC’s inmate work force independently renovated more than 50 percent of the site’s gross square feet. Construction manager Gilbane Building Co. performed the remainder of the work. Nearly all of the furniture used on the campus was fabricated and installed by Georgia Correctional Industries.

In addition, the City of Forsyth donated water and electrical infrastructure improvements to attract the project, which has eliminated a community eyesore and is expected to be an economic boon to the middle Georgia town. One reason for the boon is that the GDC’s new headquarters has moved from downtown Atlanta, and some 400 central office staff positions are being relocated.

Return to the office more confidently with this award-winning smart building app January 8, 2021 In "Products and Services » Software & Technology"

See how you can use augmented reality tech to troubleshoot smart building equipment at a distance May 22, 2020 In "Products and Services » Software & Technology"

Find out how to minimize crowds and enhance security at your elevators with this touchless solution September 14, 2020 In "Products and Services » Software & Technology"