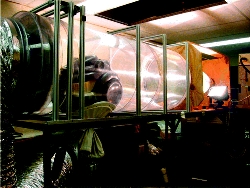 by Shane Henson — January 25, 2012—According to a new study, it may be time to get a new vacuum, especially if the one you are using has been around longer than most of your employees. Facilities managers holding on to older vacuums to save money or because they believe they still work efficiently could be doing both their janitorial staff and building employees a disservice.

Lidia Morawska and colleagues explain that previous studies showed that vacuum cleaners can increase levels of very small dust particles and bacteria in indoor spaces, where people spend about 90% of their time. In an effort to provide more information about emission rates of bacteria and small dust particles, the scientists tested 21 vacuum cleaners sold in Australia.

The vacuums came from 11 manufacturers, included those marketed for household and commercial use, ranged in age from six months to 22 years, and cost from less than $100 to almost $800. They looked at the effects that age, brand and other factors had on the amount of small particles and bacteria released into air.

All of the vacuums released some fine dust and bacteria into the air, say the study authors. Surprisingly, in some cases, vacuums with so-called high-efficiency particulate air (HEPA) filters released only slightly lower levels of dust and bacteria. Newer and more expensive vacuum cleaners were generally less polluting than older or less expensive models.

Is your university or office building reopening? ASHRAE’s new course can help you manage the HVAC March 17, 2021 In "Publications"

This updated manual can help you understand the codes for green building design, construction and operations April 2, 2021 In "Publications"

Return to the office more confidently with this award-winning smart building app January 8, 2021 In "Products and Services » Software & Technology"