by Klaus Reichardt — When the economy was booming and bustling, architects, designers, and manufacturers were encouraged to come up with an array of new design and technology ideas for buildings. And the funds were available to make them happen. 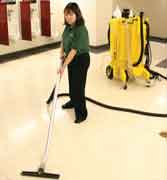 Currently, however, building construction in the United States is near a standstill, and for the most part, only those properties planned and funded before 2008 are under construction. Further, instead of taking risks on new designs and technologies, most developers have become much more conservative in their needs and wants. Yet, this does not mean styling changes are not occurring; they are.

One area of commercial properties that is changing and expected to evolve even more in the near future is the restroom. And these changes are expected to have an impact on the professional cleaning industry in terms of how restrooms are cleaned and maintained.

Possibly the last really noteworthy restroom change most people are aware of, which started about 20 years ago, was the removal of outer restroom doors, especially in larger public places, such as airports and convention centers, in favor of labyrinthine entries. In addition to removing the “touching” necessary to push or pull a door open, it is believed these mazelike entries have also helped promote restroom security, minimize vandalism, and discourage bullying in schools.

Another restroom change most of us are aware of is the growing use of infrared or sensor-controlled fixtures. Although early models introduced 15 or more years ago were often problematic, these systems are far more dependable today and have essentially become standard in most new restrooms.

In the near future, automatic, touchless fixtures controlled by these infrared detectors or sensors are likely to replace all handles and controls in restrooms, making automatic soap and paper dispensers, toilets and urinals, faucets, and electric hand dryers the norm.

In addition to eliminating touch points, sensor-activated systems have become popular because they help reduce costs and increase sustainability. For example, property managers have found they can better manage how much paper and soap are used, when sensory systems are installed. In many cases, the amount of soap/paper dispensed can be adjusted, further helping to control usage and costs and minimize waste. Additionally, some studies now indicate less water is wasted when these systems are installed, further promoting sustainability and helping to reduce costs.

Along with labyrinthine entries and sensor-controlled dispensers, what other changes can we expect in future restroom design and, even more important for our purposes, how will the impact the professional cleaning industry? Among those that are evolving now and expected to become more commonplace in the future are the following:

No discussion of trends in restrooms is complete without a mention of water conservation. In some facilities, more water is used, and often wasted, in restrooms than in any other area of the building. In 1992, the U.S. Congress passed the Energy Policy Act, which included a provision that toilets sold in the United States use no more than 1.6 gallons of water per flush (GPF). At that time, many toilets, even new ones, were using as much as 3 GPF or more. The act also required urinals to use about a gallon of water or less.

Early systems did not work well, often requiring multiple flushes to perform adequately. This defeated the goal of the act. Further, they often required more cleaning because waste was not adequately removed.

Most of these problems have been alleviated, and now many manufacturers are introducing toilets that use 1.3 GPF or less. Some urinals also use less water.

Many facilities are taking this a step further and have installed no-water urinal systems, which educational facilities especially like, because they typically have no flush handles or other exterior plumbing, a common target for vandalism. Further, they tend to be less costly to purchase and install, and of course there is the water savings, estimated by some sources to be about 40,000 gallons of water per year per urinal, depending on the number of uses.

We have already pointed out how some trends in restroom design and technology will help keep restrooms cleaner, making the custodial workers’ job easier. In some cases this was not the original intention for the change but an added benefit.

With fewer touch points and less graffiti to clean and sanitize in the restroom of the future, cleaning workers will be able to devote more of their time and energy where restroom cleaning is most needed: fixtures and floors. And it is expected fixture and floor cleaning procedures will become more automated in both large and small restrooms. This will be accomplished by using “touch-free” or “no-touch” cleaning methods and dispense-and-vac and/or spray-and-squeegee systems. Studies indicate these systems help reduce cleaning times, which can lower costs. They are considered safer for the cleaning worker to use because touching of restroom fixtures is unnecessary, and they eliminate the need to mop floors, which can spread contaminants instead of removing them from floor surfaces.

Experts in scores of industries predict all kinds of things, many of which never come to pass. However, the restroom trends discussed here are on more solid footing for one important reason: Many are already being planned, developed, or implemented.

Manufacturers of restroom fixtures tend to be a close-knit group. They watch each other and developments in their product lines closely. If they see one manufacturer introducing a product that looks promising, in a short time, the other manufacturers often come out with something similar. This solidifies the direction of the industry and should help ensure many of the trends described here come to pass.

This article first appeared in the 2012 February issue http://issatoday.issa.com of ISSA Today.

Klaus Reichardt is a managing partner of Waterless Co., LLC, a leading manufacturer of waterless urinal systems and other restroom products. He can be reached at klaus@waterless.com.