Energy consumption represents a significant portion of a building’s annual operational budget. It is also one of the most controllable facility costs and presents the best opportunity to positively impact overall performance including saving money and reducing carbon footprint. For R&D and laboratory facilities, which typically are large consumers of energy, the opportunity is even greater. Additionally, jurisdictions across the country are beginning to require mandatory reporting of energy benchmarking and consumption through the ENERGY STAR Portfolio Manager program. Disclosure of information may be triggered by a financial transaction such as sale, lease, or refinance for the facility, or it may be required based on facility size and use type. These requirements are driven by the concept that if public reporting is required, building owners will be more likely to improve the energy efficiency of their buildings. At the same time, sustainability programs encourage benchmarking and goal setting based on energy performance. For unique facilities such as research & development and laboratories which cannot be rated in Portfolio Manager, benchmarking energy consumption can be a challenge since comparative data is not readily available from many sources.

In South San Francisco, one such R&D facility suspected that their energy use was higher than it should be and began delving in. They needed to determine how much energy they were using, how much they should be using, and then make a plan to improve. The Facility Manager’s first step was to have an energy audit conducted. Using ENERGY STAR Portfolio Manager, they found that the building used approximately 411 kBtu/SF each year — nearly four and a half times the energy of the average office building. For a 62,000 square foot facility constructed less than five years ago, this was surprisingly high. Since the facility is non-ratable building type (more than 50% of the space is considered “laboratory”), a benchmark using ENERGY STAR’s 1-100 scale could not be obtained. Using a research and development-specific program, they compared their buildings to similar facilities in the Labs 21 database. The building’s energy use was estimated to be approximately 29% more than the average biology lab. From a cost perspective, they were spending between $9.75 and $12.00 per square foot; by comparison, the average research facility spends $3.77/GSF each year . Clearly there was room for improvement.

In addition to evaluating current energy use patterns, the energy audit team evaluated the energy consuming base building systems and operational patterns, and identified energy conservation measures. As expected, for a building dominated by lab space which is largely conditioned with single pass outside air systems, the majority of the opportunity was in projects related to the heating, ventilation and air conditioning (HVAC) systems. System scheduling played a large role in that several of the HVAC systems were set to run 24/7 and could not be easily turned off or controlled at reduced settings. The systems had also been designed to operate with variable frequency drives, but the drives had either never been provided or were never connected to the controls system.

Several projects were identified, both low/no cost and capital intensive, that would provide an estimated $100,000 in savings including:

The projects were prioritized in terms of implementation cost, cost savings, energy savings, and payback. The Facility Manager had some decisions to make.

After the audit, it was also clear that the building would be an excellent candidate for retro-commissioning. Through retro-commissioning, the control systems and sequences of operation could be tested against the design intent and current requirements. Additional recommendations related to logged runtime data could be made to provide even greater savings.

The first major project to be implemented was an upgrade of the building automation system (BAS) which included reprogramming occupancy schedules, system control setpoints, and providing greater functionality and programming access to facilities personnel. As simple as the project sounds, it actually required quite a bit of programming expertise and time. Nearly three months and $26,000 later, the changes were implemented. Energy use began to drop…a lot (see Figure 1). 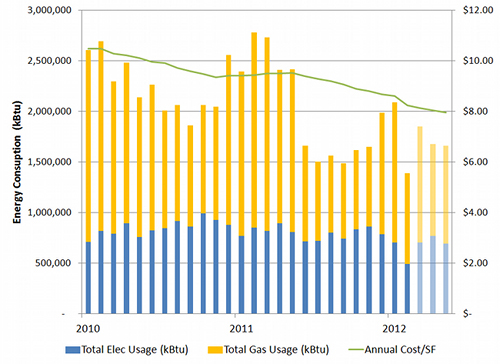 Figure 1. Building Energy Use chart shows the consumption dropping since the changes were implemented in May 2011.

From a financial perspective, the project results were very attractive providing a simple payback of six months. And don’t forget, the initial $48,000 projected annual savings does not end in the first year of implementation. That money will continue to be saved each year, freeing up funds for other uses. In addition to the financial gains, the project provided environmental benefits by reducing electricity and natural gas-burning related greenhouse gas emissions. It also provided credibility for future facility improvement projects, and is serving to inspire energy saving projects at additional sites.

The facility manager worked with the utility company to take advantage of rebate and incentive programs locally available. Through the utility company, they are now considering projects that will improve airflow management in the server room, upgrading the existing lighting, controlling ventilation, installing occupancy sensors, and upgrading the VAV systems. Following the energy audit, retro-commissioning was conducted which identified additional projects that are estimated to save nearly 40% additional in energy costs as well as provide significant energy consumption reduction.

Through all of this, close coordination with building occupants was required. In most office type facilities, thermal comfort is the top complaint and a key concern. While this facility is no different in that respect, it also had specific areas whose thermal parameters were not dictated by the occupants, but instead by sensitive equipment and research projects with tight temperature parameters. Some laboratories had to be allowed to run 24/7 while others could be shutdown during unoccupied hours.

Through aggressive management, the facility has saved almost $80,000 to date since implementing the BAS upgrade project in May 2011. From that project alone, projections indicate they are on track to save almost $96,000 and reduce energy consumption by approximately 27% over a full year period. The facility manager continues to track energy consumption through ENERGY STAR Portfolio Manager. Measurement and monitoring energy, greenhouse gas emissions, and cost savings plays a crucial role in reporting facility successes on an ongoing basis. With a track record of proven results, the facility manager can now easily justify new energy savings projects and track operational successes.

Facility Engineering Associates, P.C. (FEA)  is an engineering and facility management consulting firm supporting owners and managers of existing facilities. FEA was founded in 1992 on the principle that there is a better way to manage the built environment by balancing the challenges of providing a safe, secure, and healthy environment; maintaining an aging infrastructure; and improving how the FM organization operates. We help our clients improve the way they manage, operate, maintain, and fund the built environment to enable facilities that are safer, healthier, resilient, productive and cost-effective.

*The information above is for general purpose only and subject to copyright protection.

For efficiency upgrades with no up-front costs, check out this industry-disrupting, patented energy-as-a-service model May 31, 2021 In "Products and Services » Energy"