News » Products and Services » Other

by Brianna Crandall — April 7, 2014—Singapore, already known as one of the cleanest and greenest cities in the world, is now moving towards setting the pace in the area of building construction efficiency by requiring the use of prefabricated building technologies such as prefabricated bathroom units (PBUs), prefabricated prefinished volumetric construction (PPVC), and cross-laminated timber (CLT). The government will recognize progressive firms with good track records in adopting productive construction designs and methods with a higher productivity weightage under the tender evaluation framework.

As Singapore’s Building and Construction Authority (BCA) explains the initiative, as the key driver of building projects at the top of the construction value chain, developers have a greater role to play in driving construction productivity by setting the direction in adopting productive technologies. Therefore, new measures such as requiring the use of productive technologies for selected Government Land Sales (GLS) sites (land released regularly through a land sales program for private sector development to meet demand due to economic growth) are aimed at getting more developers to adopt new technologies and lead the demand for such technologies.

From the second half of 2014, the use of prefabricated bathroom units (PBUs) will be mandated for all residential GLS sites to drive greater adoption of the technology, which is able to reap manpower savings of about 60%. More than 14,000 of such bathrooms, which are fully fitted out in factories before being assembled on-site, have been adopted in more than 20 private residential projects since 2005, notes BCA.

The adoption of new productive technologies such as prefabricated prefinished volumetric construction (PPVC) and cross-laminated timber (CLT) will also be required for some suitable GLS sites. In addition, a minimum percentage of prefabrication level will be set for Industrial Government Land Sale projects starting from the second half of this year. To encourage private developers to adopt new productive technologies, incentives will be given to those on non-GLS projects and those who are going beyond the requirements for GLS projects. 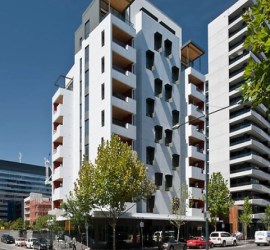 The Forte in Melbourne, Australia, at 10 stories high is currently the tallest residential timber building in the world. CLT construction has also been used in healthcare, sports and other institutional projects.

“Buildings can be completed faster with the use of these productive technologies. When pushing for the adoption of productive technologies such as drywalls, PBUs, PPVC and CLT, we look beyond just labor efficiency. We also consider if they can help to reduce dis-amenities to residents living near the construction site. As these technologies involve a large extent of off-site production before they are assembled on-site, we can expect less noise and dust during construction,” said Dr. John Keung, CEO of the Building and Construction Authority.

To ensure that developers take greater ownership in implementing buildable design and use of labor-efficient construction methods, appropriate enforcement action may be taken against developers whose projects deviate from the approved plan, and progressive firms with good track records will gain a higher productivity weightage under the tender evaluation framework, says BCA. Key government procurement entities will also be formulating their own productivity roadmaps and adopting the national productivity target of 2%-3% productivity improvement per year.