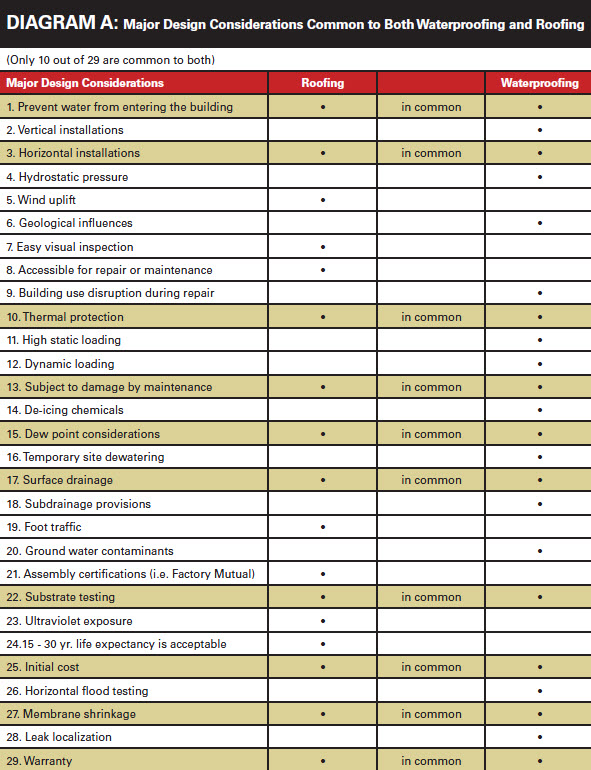 Many architects and other design professionals today tend to minimize or ignore the subtle but important distinctions between waterproofing and roofing. While this tendency is less common than in the past, there are still an alarming number of design professionals who assume that roofing and waterproofing are very similar and therefore, wrongly, assume that those who are capable of designing a roof system are equally capable of tackling a below-grade or plaza waterproofing system and vice versa. The truth is, even though they both have the common goal of keeping water out of the building that is about where their similarities end. 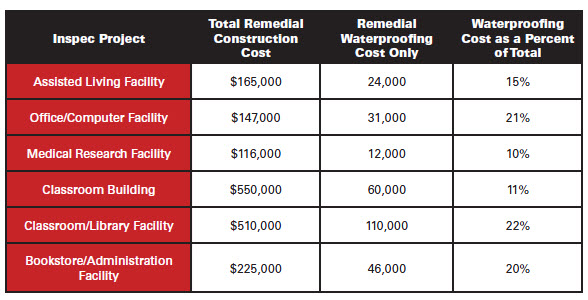 As one who has been employed by a roof design firm for over 16 years, I have a deep appreciation of the level of expertise necessary to design a roof system for long-term performance. However, imagine that you have designed such a roof for a commercial building complete with a high-end thermoplastic membrane, a one quarter inch per foot slope, interior drains and color-coated sheet metal clad parapets with overflow scuppers. Now, imagine that, without your knowledge, someone permanently places two feet of earth on top of your beautifully designed roof. All of a sudden, issues such as hydrostatic pressure, leak localization, high static loading, subdrainage, sheet metal corrosion, and repair accessibility (to name a few) are all introduced, turning your 20 year roof into something far less (Diagram A).

Why Waterproofing Should Perform for the Life of the Building

A below-grade waterproofing system that is either poorly designed, poorly installed, or both, can be a financial time bomb to an unsuspecting building owner if the system fails within the lifetime of the building. This is usually not due to the cost of repairing or replacing the waterproofing membrane itself, but rather of the disproportionately high costs related to re-accessing and exposing the membrane.

When a roof develops a leak, locating and repairing the failure is usually relatively straightforward. The materials are accessible and any standing water can be easily swept or drained away. Or, when a masonry wall has to be tuck-pointed, scaffolding can be erected and the accessible brick veneer can be repaired. See story sidebar on page 23 for the six reasons why it is far more time consuming and expensive to re-access and expose a failed waterproofi ng membrane.

Generally speaking, whenever large static loads, such as mechanical equipment, are superimposed on a roof the load is transferred directly down to the structure by means of curbs, pipes, or other methods of support rather than simply resting the load directly on the roofing membrane. Typically, the membrane is then flashed around these penetrating supports. However, it is not unusual for a waterproofing system to have to bear the high static loads of such overburden as thick concrete wearing slabs, large quantities of earth, free standing planter boxes, retaining walls and other permanent structures. Under these static load conditions, the designer has to make sure that all of the waterproofing related materials will not be initially damaged or damaged over time as the result of what’s referred to as compression “creep”. Dynamic loading is another design consideration that differentiates roofing from waterproofing. Obviously, a roof does not have to be designed to withstand moving vehicular or other similar loads. However, it is not at all uncommon for a plaza or tunnel waterproofing system to be subjected to the types of dynamic loading associated with roadways, parking areas, delivery/loading areas and even airport runways. The long-term deleterious affects of a given static load is far less than that same given load applied dynamically over time and this has to be provided for by selecting materials with appropriate densities and by distributing the concentrated dynamic loads over larger areas. When designing the waterproofing system for an underground pedestrian tunnel that has Boeing 747s taxiing overhead many times every day, unique challenges are encountered that have to be properly addressed if the system is to continue to perform over long periods of time.

Since a roofing membrane is rarely subjected to the type of hydrostatic pressure that would “drive” water through a failure and since roofing membranes are easily assessable allowing relatively inexpensive repairs, such leak localization is not a critical characteristic of roofing assemblies.

However, if a waterproofing membrane should develop a failure and the substrate is such that water is allowed to laterally migrate below the membrane, water could travel a considerable distance before it shows up in the interior space below, due to hydrostatic pressure. Without being able to identify the exact location of the membrane failure, the owner would have no recourse but to replace the entire waterproofing assembly (Diagram C, Photo 2).

Unlike roofing, which drains only at the surface, waterproofing assemblies should include “subdrainage provisions” which lowers or removes the hydrostatic pressure which the waterproofing membrane would otherwise be subjected to. Not only can subdrainage extend the performance life of the membrane, but in the event of a membrane failure, it can also greatly reduce the amount of water that enters the building, since the water is not under pressure.

Subdrainage, in a horizontal application, allows moisture, which has penetrated the overburden to percolate down to the membrane level where it is “encouraged” to migrate laterally through either a composite drainage sheet, or an aggregate layer. Since the membrane is sloped, the migrating water is then discharged by means of either bi-level interior drains or at the perimeter edge condition. In a vertical application, such as a foundation wall, water either drops down within the cores of the composite drainage sheet or percolates down through a free draining aggregate backfill. At the base of the foundation this water is then discharged by means of a perforated drainage pipe system or “drain tile”.

In addition to extending the performance life of the membrane, subdrainage, in a horizontal or plaza application, can also extend the life of concrete, brick pavers, or other hard wearing surface materials in freezing climates (Photo 3).

Sometimes waterproofing design must take existing conditions into account such as geology, groundwater and even groundwater contaminants, which are obviously not a concern in roofing design. Diagram D illustrates the elaborate measures that sometimes must be taken in order to properly manage existing groundwater in a particular geological condition, both during and after waterproofing installation. The volume of groundwater that was expected to enter the excavation through cracks and fissures in the bedrock at this airport was such that full-time site dewatering, as shown in the diagram, had to be maintained. In addition, tests revealed that the groundwater was contaminated with hydrocarbons, ethylene glycol, and traces of benzene, all of which are capable of chemically “melting” most waterproofing related products over time. Consequently, special care was taken in specifying products that were compatible with this “witches brew” of contaminants.

Typically, roof membrane substrates are not of the type that require testing prior to the membrane application (i.e. ballasted EPDM membrane on expanded polystyrene). However, this is not the case with waterproofing.

As previously discussed, the waterproofing membrane must be completely and permanently bonded to the substrate in order to achieve good leak localization characteristics. Most waterproofing substrates are some form of concrete (CMU, CIP or precast), which can vary in moisture content, surface texture, and applied surface coatings, and thereby affect the membrane bond. This is why rigorous on-site substrate testing for adhesion and moisture content is recommended in order to achieve a permanent long-term bond between membrane and substrate (Photos 4, 5, 6, and 7).

Since leak localization characteristics are not typically built into roofing assemblies for reasons earlier discussed, it is not typical to conduct leak testing on a newly installed roof for fear of inadvertently introducing moisture into the insulation and other absorptive materials located between the membrane and the structural system. However, since it is so expensive to “dig up” and re-access a failing waterproofing membrane, for reasons earlier discussed, it is prudent to conduct such testing on newly installed waterproofing membranes prior to the installation of subsequent overburden materials. In fact, many membrane manufacturers require it for certain warranties. Such leak testing can include flooding (Photo 8) and seam pressurization (Photo 9). Our firm has developed a variation on the flood test. When the overburden materials provide adequate containment weight, we will design the assembly with a 3/8-inch layer of inexpensive granular bentonite directly beneath the primary sheet membrane. Not only does the bentonite component act as a back-up waterproofing system and prevent moisture migration under the primary membrane, it also enables us to locate leaks during flood testing by free swelling or “hydrating” directly underneath any failures in the primary membrane. At these bulging locations, the primary membrane is opened up, the hydrated bentonite is replaced with dry product, and the membrane is repaired.

One leak testing method that is being used more and more in vegetated roof applications, as well as plaza waterproofing, is electric field vector mapping (EFVM). This technology is a non-destructive, lowvoltage, proprietary, testing method that creates an electrical potential difference between a non-conductive membrane surface and a conductive structural deck or substrate. An electric field is created by applying water to the membrane surface which then acts as a conductive medium. A breach in the membrane creates a ground fault connection, or vector, which can then be measured and plotted by a technician. Separate but equally important areas of expertise

With the ever-increasing demands society continues to place on the performance of our buildings, resulting in an increased complexity of all building components, it is becoming increasingly necessary to select qualified people who have the expertise and experience necessary to design these components for long-term performance. As a wise man once said, “There is never enough money to do it right the first time, but there always seems to be enough money to do it over again.”

David Campbell, AIA, RWC has been employed with Inspec since 1994. He is a
licensed Architect, Department Manager and an Associate with the fi rm. He is one
of only 25 Registered Waterproofing Consultants in the United States, and one of
only four who is also a licensed Architect. Mr. Campbell’s primary areas of expertise
at Inspec include below-grade waterproofing, subdrainage, vegetative “Green”
roofs and exterior walls. While at Inspec, he has received awards for his work in
forensic investigation and design. He provides continuing education presentations,
writes technical articles, and provides expert testimony in legal matters.