by Brianna Crandall — March 29, 2021 — In the event of a fire, smoke — the largest cause of fire-related deaths — can travel just as fast as flames, posing major safety risks to a building and its occupants, says Trex Commercial Products. To provide optimal protection against the spread and impact of smoke, the national provider of architectural railing systems has introduced a new Smoke Baffle System engineered to serve the safety and aesthetic needs of today’s commercial settings. 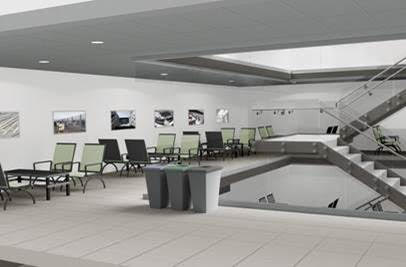 According to the US Fire Administration, more than 100,000 commercial building fires occur each year in the US, resulting in thousands of injuries and deaths, along with over $2 billion in damages. If not properly contained, smoke can lead to reduced visibility, making it difficult for building occupants to identify and follow exit paths. In addition to health and fatality risks, smoke can also cause serious and costly property damage.

A smoke baffle, also known as a “draft curtain,” corrals heat and smoke into curtained areas to prevent the spread and to help facilitate safe building evacuation. A study published in the Journal of Fire Protection Engineering also found that a draft curtain can reduce sprinkler activation time by up to 15%, allowing for faster sprinkler activation in the event of a fire.

A smoke control system is critical for the safety of any commercial building to enhance safe exit routes, minimize property damage and save lives. Staying true to our commitment to safety and style, Trex Commercial Products’ new Smoke Baffle System offers the ultimate marriage of form and function and ensures the utmost protection against the spread of smoke.

Available in clear glass or with frosted or digitally printed finishes, this sleek smoke screen is customizable and can be mounted below or flush with a finished ceiling, allowing seamless integration in mezzanine spaces, such as stairways and other open concept areas, to prevent smoke from rising to upper levels.

Tips for preparing commercial restrooms before reopening your building May 8, 2020 In "Products and Services » Publications"

How safe is it to ride an elevator during the pandemic? February 26, 2021 In "Surveys and Trends"