by Stephanie Fanger, M.S., LEED AP BD+C, Assoc. IIDA, FMP — The workplace has undergone monumental changes in the past century. The U.S. Environmental Protection Agency has cited that Americans spend an average of 90 percent of their time indoors. As human beings often spend a majority of the hours in the day at their workplace, more so than their home, it is important to understand the effects of the built environment on the office employee.

According to the Commercial Buildings Energy Consumption Survey as of 2003, there are more than 4.9 million office buildings in existence in the United States alone. As there is a plethora of office classified buildings, it is beneficial for facility managers to understand ways in which workplace design can be improved, as a vast amount of time can be spent at one’s place of employment. Additionally, employee salaries and office real estate are the two largest expenditures in regard to a company’s expenses.

“It is about understanding how space, the second most expensive resource an organization has (its people being the first), can be leveraged to help those people who work more effectively, and to attract and retain the right people in the first place” (Becker and Steele, 1995). It is advantageous to investigate the ways employees function within their office environment to ensure occupants are able to be productive and morale is high. 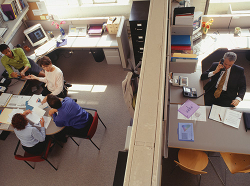 History of the U.S. office

Office building floor plan configurations in the United States have undergone several major transformations throughout the past century. From 1900 to 1950, national economic growths led to the introduction of reinforced concrete and the modular ceiling grid system, which provided greater amounts of leasable business space as well as the creation of several business opportunities (Henderson and Mays, 2003). People were able to meet in a central location which moved the emphasis on agriculture to business. This also allowed for cities to become more densely populated—creating a need for downtown business facilities with ample transportation.

The time period from 1950 to 1970 promoted the expansion of corporate culture in which organizational space was allocated based upon an employee’s hierarchy. Job titles and ranking equated a standard amount of square footage per employee. Additionally within this timeframe, office environments were designed on the concept of open planning which positioned the entry level employees together based upon their function and department classification. Employees who possessed the ranking of a manager or supervisor were given the prime real estate of the office, which would reside around the building’s interior perimeter with window views. This hierarchy-based floor plan also allowed management to observe employees from their desk, as the open seating arrangement displayed no physical boundaries in eye’s way.

Following thereafter, the years of 1970 to 1990 took advantage of information technology and the stress on electronic communications (Henderson and Mays, 2003). The defined location of an office changed from being one distinct building to having multiple identities which ranged from the home, car, airplane and hotel. This shift in where the work-related tasks took place resided on the dependence of technology, placing a higher concern on independent efficiency. The furniture industry responded to this change in workplace with the creation of modular furniture systems which were flexible, easy to assemble, electrified and customizable.

From 1990 to present time, office environments still are stressing importance on catering to wireless technology, as well as new emphasis on adjustable settings to the user’s preference, environmental sustainability, and individual control over lighting and thermal comfort. Working hours have become integrated to accommodate any person anywhere, with some businesses implementing 24/7 operations. Universal planning, telecommuting, hoteling, webinars, smart phones, remote workstations and downsizing are all buzzwords which became popular from the integration of technology into the workplace.

Psychologically, if office employees are content with their working relationships and feel safe within the workplace, their work will yield favorable outcomes. Researchers Staw, Sutton and Pelled (1995) propose that employees who feel and display positive emotions and actions are more likely to experience positive outcomes within their careers. They state that positive emotion has desirable effects on a person’s relationship with their coworkers who promote greater task activity, persistence within challenging situations as well as enhanced cognitive functioning. Additionally, office employees who often express pleasant attitudes are considered more likable and will be rated favorably as well as possessing the ability to cooperate well with others. The arrangement of the office can affect an employee’s opportunity to build a solid rapport with their co-workers and management team, as well as thwarting it.

Employees who feel safe within their workplace will be more productive than office workers who feel their life is at risk. The physicality of the workplace lends itself for employees to feel safe at their assigned workstation. Discrimination based on age, sex and race all can create employee stress which leads to emotional and behavioral side effects (Hinduja, 2006). If employees are situated in a configuration which does not discriminate upon these factors, the occupant will be more apt to produce higher quality work.

In an ideal office environment, managers and supervisors would be seated near their employees to observe any odd behavior which can negatively affect the morale of the team. Workplace violence is claimed to be the greatest threat to a company, followed by the theft of proprietary information (Carcione, 2000).

Organizational ecology is a term coined by “Workplace by Design” authors Franklin Becker and Fritz Steele to reflect how organizations successfully operate in regard to space and time. This phrase describes the way in which employees are successful in their careers through the decisions of information technology, physical settings, furniture, work processes, human resource policies and hierarchy of management.

In today’s society, the two most popular types of office workstation configurations, which are based off of organizational ecology, are known as open office environment and closed office environment. Both classifications have advantages and disadvantages, and truly depend upon the specific company and group of individuals who reside in the space to quantify which is more necessary. Facilities in modern times typically are more characteristic of the open office configuration, placing employees in the same desk configuration with equal opportunities for all.

GlaxoSmithKline (GSK) is a pharmaceutical manufacturer that specializes in manufacturing and marketing products in the areas of anti-infectives, central nervous system, respiratory and gastro-intestinal. After the company merged in 2003, there were challenges on workplace strategies based upon office configuration, which GSK studied on the operating techniques of their customers.

Richard Evans, director of real estate stated, “As we undertake any workplace change project, we look at how the department functions, primary modes of communication, needed adjacencies and the cultural position of the organization. You need to get customers thinking in those terms because in the working environment, form follows function.”

Understanding the ways in which employees utilize their day is important for comprehending the highly occupied spaces, which was accomplished as a silent observation (Figure 1). Judging from this case study, workstations were not the most occupied space throughout the day, and could be reconsidered spatially, to functionally tie with the hours equated with their use.

Through studying the patterns of the employees, the company headquarters was renovated to better suit the needs (Figure 2). The number of meeting rooms was increased to hold large groups, at least six conference rooms are able to fit 64 employees. The total seats within the space were increased by 35 percent, allowing for different areas for employees to accomplish their work tasks, no longer allocating individualized workstations to each employee. The space per person was reduced by 26 percent, as personal workstation previously was not being occupied for the totality of the work day (Real Estate Executive Board). 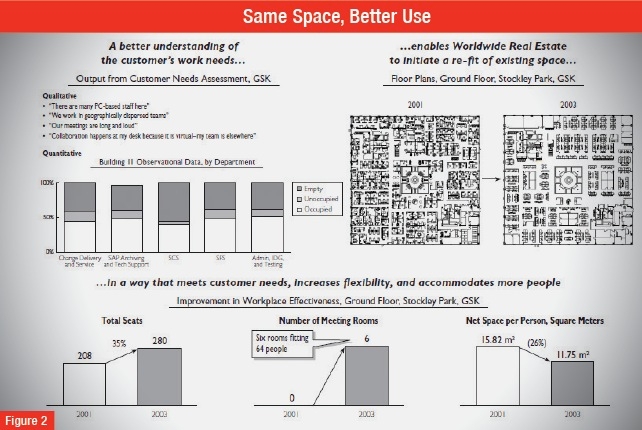 Procter & Gamble (P&G) is a popular maker of products which are divided into three sectors: health and well-being, beauty and household care. Similarly, to the previous case study, P&G was looking to renovate their workplace to benefit the employees and further productivity. Space was rebranded, to introduce the importance of the workplace to employees. Five themes which were the main focus of the renovated space included: space’s function, proper scope, timing for change, scheduling and the bottom line.

The values which P&G wanted to communicate to customers and their employees is that the workspace drives competition as it aids employees to be more creative and efficient. Space, technology and culture are all key elements to the success of how staff interacts. Figure 3 displays the spectrum of workspace in which collaboration and teaming range. The renovation in which P&G pursued ranges on the more collaborative side, with the prototypes of neighborhood. This concept is characteristic of an open office environment. 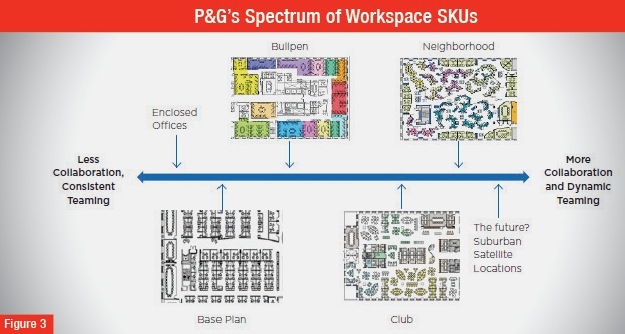 As both of these locations projected different values, the space needed to reflect these concerns with the arrangement of space. Surveys then were sent out to understand how the different types of employees cherished their workplace. Through separating employees based on their location style, the importance of the workplace is able to be studied more in depth (Real Estate Executive Board).

The open style office layout may be more attractive to recent college graduates, thus placing a different level of priority upon the configuration of interior space in companies. This incoming workforce is known as the Millennial generation, which includes people born between the years of 1981 and 2000. “By 2010, an estimated 31 million of them will be in the U.S. workforce, outnumbering Gen Xers and taking up the slack left by retiring Boomers” (Lee, 2011). This statistic displays the importance of understanding the Millennial generation, as they will be dominating the workforce for years to come. This generation carries a sense of entitlement with them, and may not understand the placement of space through a hierarchy-based system which is seen in the closed office configuration.

Millennials are very assertive and are group oriented, believing in egalitarian leadership. This group may have different time schedules than the generations that came before them, operating on a 24/7 timeframe of accomplishing business tasks. Additionally, this generation is motivated to accomplish job tasks through technology, especially up-to-date smartphones, laptops and tablets. These personality characteristics are imperative for executives of corporations to take into consideration, as their company’s values may not align with the Millennial generation. Therefore, drawing from this research about the Millennial generations, it is beneficial for companies to understand how their workplace communicates, specifically through spatial organization, technology, furniture choices and management techniques.

Facility managers need to assess how the company’s goals are portrayed through the use of space, and ultimately what can better the morale and productivity of the building’s occupants. FMJ

Additionally, she serves as the student advisor for the IFMA Greater Phoenix Student Chapter. Fanger can be reached at stephaniejfanger@gmail.com.

Integrating sustainability + safety into the buildings of the future March 18, 2022 In "Magazines » FMJ"