by Sam McManis — Waterside problems in steam boilers are generally the result of corrosion and deposits. These problems can manifest in many ways: high operating and maintenance costs, downtime and production losses, premature equipment failure and unsafe operating conditions.

However, an effective boiler water treatment program avoids the negative consequences of these problems while efficiently using fuel and water to meet steam requirements, but it is not without its challenges. Corrosion control in off-line steam boilers can be particularly difficult. In fact, as many cases of tube failure due to corrosion probably occur in idle steam boilers as in operating ones.

Dissolved oxygen can cause serious corrosion damage to the carbon steel metallurgy used for boiler construction and is the primary cause of corrosion in out-of-service steam boilers. Oxygen corrosion is characterized by intense localized corrosion areas referred to as “pits,” which may be covered by a cap called a “tubercle.” Because oxygen attack is concentrated in a small area of the total surface, tube perforation and failure can quickly occur although only a small amount of metal has been lost. 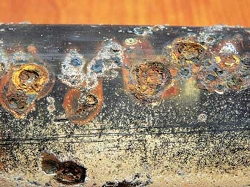 Oxygen pitting on a boiler tube. Photo courtesy of Chem-Aqua.

Sulfite is commonly added to the boiler feedwater as an oxygen scavenger to help prevent oxygen corrosion. However, severe oxygen pitting can occur in an off-line boiler even when a normal 30 to 60 ppm sulfite residual is maintained in the bulk boiler water. This is because the oxygen drawn into an idle boiler tends to collect at the interface between the water and metal surface, causing the sulfite to be consumed immediately next to a boiler tube without being used up in the bulk boiler water. Also, clean boiler tubes are more susceptible to oxygen corrosion than scaled tubes. With modern boiler water treatment technology and the emphasis on energy efficiency, clean tubes are now standard and proper off-line boiler storage procedures are more important than ever.

In many facilities, one or more boilers are off-line for an extended period of time. Some facilities only use the steam boiler seasonally, when the weather is cool enough to warrant operation for heating. Other facilities have processes that only require steam during the day or work week and, in some, the boiler is turned off at night or over the weekend. Facilities with multiple boilers and excess capacity generally keep one or more boilers on standby for a month or more at a time. Fluctuating steam demand can also cause a boiler to spend a majority of the time in low fire or turned off. In each of these cases, the vacuum created as the boiler cools causes dissolved oxygen intrusion that can result in severe oxygen corrosion unless proper steps are taken.

Wet Boiler Storage
To prevent possible boiler damage during wet storage, there must be no danger of freezing. Effective corrosion control in wet stored boilers is directly dependent on maintaining high levels of alkalinity and sulfite in the boiler water, and not allowing any intrusions of oxygenated makeup, feedwater, steam or condensate. As a general rule, a minimum of 100 ppm of Sulfite and 400 ppm of P-Alkalinity should be maintained in a wet stored boiler.

The following procedure is generally recommended for wet storage.

If the boiler has been drained, add sufficient treatment chemicals while refilling to achieve the desired treatment levels. To ensure the chemicals are well mixed and to expel any excess oxygen, the boiler should be fired temporarily. If the boiler was not drained prior to placing in storage, add additional chemicals to raise treatment levels into the desired range shortly before taking offline. Be sure to add enough chemicals to achieve the required levels after the boiler has been flooded. Allow the boiler to cool to less than 200°F, then flood with feedwater to the top of the drum. If the “quick fill” is used to flood the boiler with cold makeup, be especially careful that the sulfite level does not drop below minimum. Make sure all connections are closed so the steam line or superheaters are not flooded. 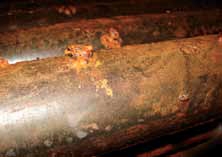 When the boiler is returned to service, increased blowdown may be necessary to reduce the alkalinity and sulfite levels to their normal ranges.

Dry Boiler Storage
Dry storage involves thoroughly draining and drying the boiler, and then adding either a moisture absorbent (desiccant) or a vapor phase corrosion inhibitor prior to sealing. Precautions must be taken to prevent the entry of moisture during storage, especially when using a desiccant. All valves should be examined to ensure they do not leak. If necessary, disconnect water and steam lines during standby status and block off the openings.

Proper storage of off-line boilers is often overlooked until corrosion problems and damage occur. These problems and the associated costs can be minimized by carefully considering the alternatives and following an established boiler storage procedure.

Sam McManis is an engineering manager for Chem-Aqua. He can be reached at sam.mcmanis@nch.com.

Now FMs can monitor all VRF units from one location, with this new touchscreen controller October 20, 2021 In "Products and Services » HVAC/IAQ"