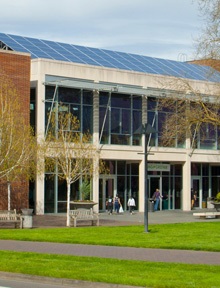 by Brianna Crandall — October 20, 2014—The U.S. Department of Energy (DOE) is recognizing the cities of Beaverton and Hillsboro, as well as the Portland Public School District, for their leadership in reducing energy use. As Better Buildings Challenge partners, the three entities have committed to reduce the energy use of ten million square feet of building space, including libraries, schools and other public facilities, by 20 percent over the next decade, and to showcasing their innovations and successful strategies for other state and local government and school district leaders to follow.

Beaverton is making significant progress toward its citywide energy goal with energy savings of 15 percent over the last four years. Through the Beaverton Better Buildings Challenge, the city is working across its departments, the Beaverton School District and privately owned buildings to identify efficiency investments and track savings over time. At the Beaverton City Library, the city upgraded lighting and heating controls and the heating and cooling monitoring system, and added a new roof complete with solar arrays, leading to expected annual savings of 20 percent or more than $20,000.

Portland Public Schools is driving energy reductions at 90 educational and support facilities comprising more than 8 million square feet. The school district upgraded the mechanical and electrical infrastructure and equipment at Benson Polytechnic High School, its Better Buildings Challenge showcase project, much of it dating back to the school’s original construction in 1916.

A cornerstone of the President’s Climate Action Plan, the Better Buildings Challenge supports the goal of doubling American energy productivity by 2030, while motivating corporate and public sector leaders across the country to save energy through commitments and investments. To date, more than 200 organizations are partnering with the Energy Department to achieve 20 percent portfolio-wide energy savings and share successful strategies that maximize efficiency over the next decade. Across the country, Better Buildings Challenge partners are implementing energy efficiency at more than 9,000 facilities with more than 2,100 buildings improving efficiency by at least 20 percent, and another 4,500 by at least 10 percent, compared to their baseline years, according to the Energy Department.