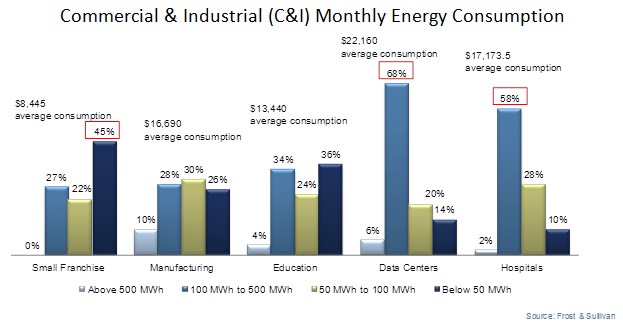 by Farah Saeed, Frost & Sullivan Principal Consultant — These days, climate change and energy cost are highly discussed topics across several sectors. Discussions revolve around the way these changes impact short-term and long-term decisions at both the macro and micro levels. Facilities management lies at the micro level.

Carbon emissions have long-lingering side effects that are detrimental to our environment and economy. What can individual organizations do to mitigate these concerns? Through the implementation of energy efficiency strategies, organizations and facilities can collectively reverse the potential damage of excessive energy while managing operating costs.

A recent Frost & Sullivan customer survey reveals that electricity accounts for between 9 and 11 percent of overall operating costs. In some places, electricity can account for over 20 percent of overall operating costs, which could equal as much as $240,000 a year for a single site. This number adds up for organizations that run multiple facilities.

The majority of respondents concur that the rising cost of energy is a major concern. As a result, 80 percent of surveyed respondents worry about future costs of energy. Meanwhile, 40 percent of customers expect electricity consumption to increase in the next 24 months. 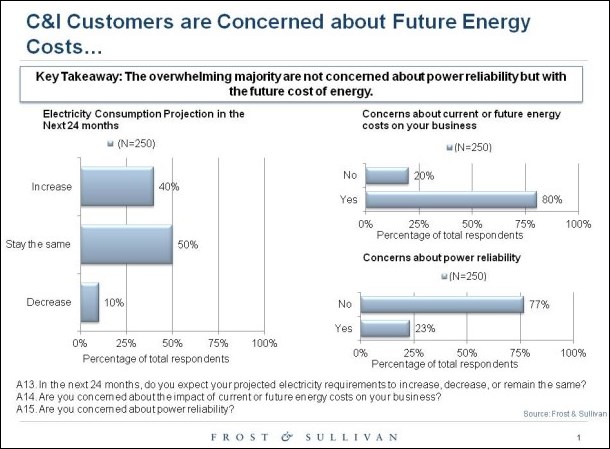 The purpose of this survey was to determine preference and significance of electricity suppliers and whether customers are likely to switch providers on a periodic basis for better bargains.

The survey specifically targeted heavy electricity users in the commercial and industrial space. The research also evaluated choices for energy management service. Of respondents in the survey, approximately 73 percent have plant and facility responsibility and job titles equivalent to a facility director or manager.

Figure 3 illustrates the makeup of respondents interviewed for the survey.

The most energy consuming device will vary depending on the site. Research suggests that 65 percent of energy in manufacturing is consumed by motor driven applications. In commercial buildings, the HVAC system is considered the least energy efficient. In the commercial and industrial space, electricity consumption is monitored more closely primarily to control operational costs.

Commercial solutions have been incentivized through a number of rebate programs such as Energy Star and Commercial Property Assessed Clean Energy (C-PACE). Similarly, smart meters are bringing the electricity supplier and end user closer together. Instead of waiting for a monthly report on usage, activity customers can monitor usage and associated cost on a daily basis. Depending on sophistication, customers can then deploy quick changes through power curtailment and demand response programs.

Power curtailment programs reward customers for energy curtailment. The two most common programs are based on capacity load response and ancillary service. In capacity load response, the customer receives payments based on the amount of electric load it can reduce during an event. Generally, customers are notified of the event a day in advance or in real time. In ancillary service, the customer receives payments for shedding all or some electricity load shifting, distributed generation, automated controls, and load shedding. This usually applies when wholesale prices are high. These programs are also being rolled out with web-accessible software tools that allow customers to manage and make bids using real time pricing and usage information. Frost & Sullivan analysis shows that this is a widely adopted program, particularly for facilities operating in the MWh load.

In addition to operating cost reductions, there is a growing pressure to curtail consumption. Strict guidelines at the state level and from the EPA are forcing the industry to reevaluate technologies and approaches to electricity consumption without compromising productivity.

Becoming energy efficient starts with recognition of a problem. More importantly, facilities managers must conduct an energy audit. This will help identify areas where there may be inefficient management of electricity load. Frost & Sullivan survey analysis shows that the majority of energy service operations are still conducted in-house. This indicates that opportunities still exist for facilities managers to implement strategies to accomplish more energy efficiency. These operations consist of: 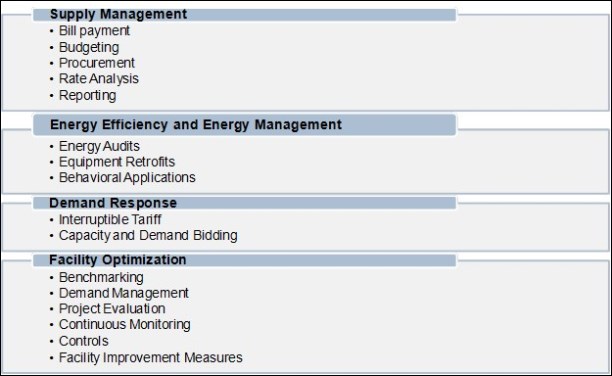 The majority of respondents stated that tight budgets, a shortage of information and lack of customized offerings are the primary reasons prohibiting them from outsourcing energy management service. With technological advancement and commercialization of energy efficiency offerings, Frost & Sullivan projects this scenario to change in the near future. The pressure to control carbon emissions is real. With convincing monetary advantages through implementing energy efficiency, Frost & Sullivan projects a wealth of opportunities in this sector.

Frost & Sullivan, the Growth Partnership Company, works in collaboration with clients to leverage visionary innovation that addresses the global challenges and related growth opportunities that will make or break today’s market participants.

These new Smart Manufacturing Centers will help FMs at U.S. plants optimize use of energy and materials September 6, 2021 In "Associations and Organizations"

Here are 93 of the most energy-efficient manufacturing plants for 2021, per EPA March 18, 2022 In "Developments » Energy Management"