by Holly Jacobson, Linnean Solutions — The effects of urbanization, population growth, and hot real estate markets, have contributed to increasingly fragmented, sparse, and ecologically stunted urban green spaces. Numerous studies over the past several decades suggest that pervasive pavement creates a hostile environment: hot summer air becomes up to eight degrees warmer in cities;1 stormwater runoff floods streets and pollutes water bodies;2 city noise intensifies; urbanites even exhibit greater stress.3 The landscapes that you, as a facility management professional manage can go a long way toward relieving these problems while maybe even saving you money.

Vegetation—whether street trees, park-like spaces, bioswales, private gardens, or green roofs—offers notable environmental, economic, social, and psychological benefits to city residents, including the occupants of your buildings. Two such benefits include reducing the urban heat island effect and improving stormwater management. For either benefit, strategically choosing the type of green infrastructure and the type of species based on its functional characteristics will help to maximize the vegetation’s effects.

The goal for facility managers is to understand which landscape and planting strategies can both improve occupants’ experiences and reduce capital and operating costs. The primary targets for cost reductions are plantings that require less maintenance, reduced stormwater management costs, and reduced cooling costs for your facilities.

Vegetation creates a cooler microclimate around buildings through direct shading, moderating solar heat gain through evapotranspiration, and through the conversion of solar radiation to latent heat.4 At an urban scale, studies show that large park areas (greater than five acres) have a greater cooling effect than smaller patches.5 Furthermore, green spaces that sit higher than surrounding urban land achieve a wider influence in moderating heat, and green corridors that run into a campus of buildings can be used to draw cooler air from nearby forested areas.6

Street trees—despite being spread along roads rather than densely clustered in parks—still can have a noticeable effect; studies have shown that a single row of street trees can drop the localized temperature by a full degree.7 For the canopies to be most effective, street trees need to be planted in large planting wells; the more substantial the root growth, the fuller the tree’s canopy.8 Vase-shaped species that grow up and out—such as elm—are most suitable, because they have large shading canopies that reach above pedestrians and cars at the street level. Because volatile organic compounds (VOCs) contribute to ozone formation—a chemical process enhanced by the heat island effect—avoiding species that emit high levels of VOCs can ensure better air quality.9 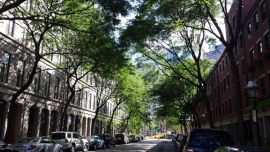 At a site level, although grass releases less heat energy than pavement, it has the lowest capacity among vegetation options to cool the ambient air temperature; shrubs achieve greater cooling effects than grass, and trees better than shrubs, due to higher levels of evapotranspiration and greater shading. To optimize cooling, plant understory shrubbery below trees to shade the soil and keep it from drying out, and plant trees in clumps so that they shade each other as well as create a broader swath of shade. To maintain cooler temperatures in nearby buildings, plant trees along the east, south, and west walls, ideally so that the trees shade the roof. For trees far from the building, choose tall species to create long shadows.10 If close to the building, plant trees such that—when mature—limbs will reach within five feet of west or east walls, and three feet of south walls. Plant shrubs within four feet of walls so that the hedge reaches within a foot of the wall within four years.11 In climates with cold winters and hot summers, deciduous trees work best; the foliage creates shade in the summer (ideally blocking at least 60% of radiation), but does not block the sun (allowing for solar heat gain) when the trees are leafless in the winter.12 Even with the added expense of leaf cleanup, the shading afforded by deciduous trees pays for the extra effort in reduced building operation expense. 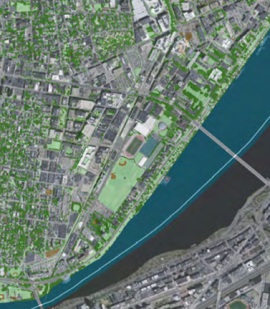 During evapotranspiration, vegetation absorbs a significant amount of rainwater, and thus can also play a large role in managing stormwater runoff. In vegetation-free areas, research has shown that 60% of rain goes directly to stormwater drains, whereas only 5-15% of rainwater contributes to runoff in vegetated areas.15 Tree canopies also catch rain, acting as a buffer for typical gray stormwater infrastructure by delaying and reducing the peak load; furthermore, plant roots improve infiltration of compacted subsoil, a process that filters out pollutants and helps to preserve water quality. Reducing and delaying stormwater runoff into municipal storm sewers can greatly reduce infrastructure costs for new projects, and reduce conveyance fees for existing buildings.

Vegetated areas that best perform stormwater filtration—i.e., bioretention systems like bioswales—include plants that have extensive, deep-penetrating root structures, and vegetation that has dense, linear foliage.16 Bioretention systems also maximize utility if they host a mix of plant species with a diversity of functions. Plants can then self-select suitable locations, such as wetter and dryer spots, and cover a broader range of the vegetated area.

The soil composition further plays a role in stormwater management. If a region experiences frequent, high-intensity rainfall events, patches of loose, sandy soils will be able to provide superior infiltration.17 Otherwise, soils with higher silt and clay concentrations are best for stormwater management. These soils with tighter textures have a higher capacity for rainwater storage—thereby reducing the volume of runoff, delaying the peak runoff rate, as well as helping plants to survive in periods of low rainfall.

Beyond mitigating the heat island effect, green roofs are also ideal for stormwater management, because they retain runoff before it leaves the roof. The growing medium alone—and the deeper the better—can greatly reduce runoff quantities.18 The same plants chosen for their high rates of evapotranspiration—those with high leaf conductivity and large surface areas—are also beneficial for stormwater management. Meanwhile, plants that have high rates of resource use will be better able to reduce runoff of both water and nutrients, thereby reducing stormwater pollution.19

Climate change is predicted to bring both hotter, dryer weather, as well as more intense precipitation events. This climatic shift will likely require rethinking green infrastructure planting and design. In the way that we seek to strengthen energy, transportation, and communication systems, could we tailor our urban green spaces to become more resilient urban infrastructure? Hopefully, the answer is yes, for both your buildings and for your community.

Although native species tend to best survive local climate variability, cities such as Portland, Oregon have begun introducing species native to regions south of the city, predicting that they will fare better as the climate shifts.20 Species that are more drought-and/or flood-tolerant are likely to fare best; one 2006 study identified 21 species, including the Allegheny serviceberry, the pond pine, shining sumac, and bald cypress, among others native to North America that exhibited tolerance to both drought and waterlogging.21 Baltimore, Maryland’s municipal tree planting program, TreeBaltimore, has begun publishing an annual recommended street tree list that identifies trees that will be better able to withstand flooding, warmer temperatures, as well as high winds in order to cultivate a more resilient stock of city trees.22

Through smart landscaping decisions, facilities and campuses can also maintain green spaces without drawing heavily on freshwater stores; lawns tend to have the highest watering demand, followed by trees, then shrubs.23 Trees, however, offer more shade than shrubs; in fact, tree shade has shown to reduce lawn watering requirements by 95 percent such that the combined watering needs of both the tree and lawn requires less water than simply a lawn. Wiser landscaping approaches that take advantage of shading can be a tactic to reduce both operating costs and strain on freshwater resources.

Lastly, a shifting climate is expected to bring new pest outbreaks, and the spread of invasive species that can better handle new climatic conditions. Ensuring that your green spaces have high levels of species diversity—rather than large swaths of monocropping, such as full rows of the same street tree species—will better guarantee that your campus ecosystem will be able to withstand or spring back from pests or invasives.24 Through proactive and strategic planting approaches, your green spaces can continue to cool your campus and manage stormwater, serving as robust and resilient urban infrastructure.

Linnean Solutions is on a mission to help organizations reduce their impact on the environment in real and trackable ways. We pursue this mission by giving specific resource-saving advice, and by providing financial and capital planning managers with tools to track and understand the environmental performance of their organizations in real time.

The impact of Covid-19 on intelligent buildings, and the way ahead January 22, 2021 In "Surveys and Trends"

How to prepare your elevators for a hurricane, from Schindler October 12, 2020 In "Publications"

For diagnostics to help you maintain the right level of utilities as your facilities gradually reopen, check out this software July 13, 2020 In "Products and Services » Software & Technology"