The ground-breaking was held at the abandoned 10th Marine Regiment headquarters, which will soon be replaced in the first of many Florence-related projects. Navy and Marine Corps officials were joined by local and state government officials as well as military, civilian and contractor representatives to commemorate the occasion. 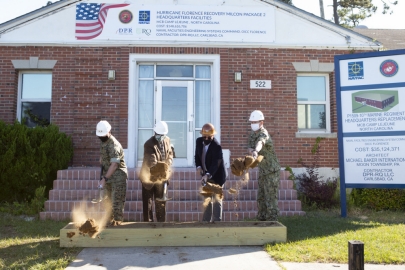 Since the hurricane made landfall in Eastern North Carolina in September of 2018, the installations have already spent nearly $825 million of $1.7 billion earmarked for facilities sustainment, restoration and modernization. Now they are set to spend $1.15 billion on 31 military construction projects across the three installations to replace 45 buildings damaged by Florence. The projects are grouped into seven separate packages, each averaging between $250 million and $300 million apiece. Five of those packages encompass projects at Camp Lejeune with the remaining two at MCAS New River and MCAS Cherry Point.

At a breakfast prior to the groundbreaking, U.S. Navy Capt. Miguel Dieguez, assistant chief of staff for Facilities and Environment, MCIEAST-MCB Camp Lejeune, described what lies ahead for the bases. “Over the next five years, you will see construction on an epic scale. It’s going to be a pretty exciting place to be.”

More importantly will be the improvements made on these buildings to withstand destructive future weather events like Florence. “Following the 2018 hurricane season, the Department of Defense came away with a lot of lessons learned,” Dieguez said. “We’ve changed our building standards to sustain what are more common extreme destructive weather events.”

Dieguez explained that strict building codes will be enforced in accordance with a DoD-wide construction standard called Unified Facilities Criteria. “There will be more robust structural requirements,” Dieguez said. “You’ll see more metal roofs on buildings than we’ve ever had. Hangars will no longer have vertical lift fabric doors. They’ve got to be metal doors so the multimillion-dollar aircraft we’re putting inside it will be there when the hurricane passes.”

Addressing Major General Julian D. Alford, commanding general, Marine Corps Installations East – MCB Camp Lejeune, U.S. Navy Capt. Jim Brown, commanding officer of the Office in Charge of Construction Florence, summed up the importance of his command’s role in the base’s recovery. “You are our customer and we’re here to deliver combat power. This installation is that platform. We need to return it back to what it was, and in the process, make it better, and more lethal than what it was before. We will endeavor to do that.”

GSA urges Congress to invest in modernizing federal facilities and to streamline approval process July 22, 2022 In "Regulations and Government"