The great COVID-19 disruption  sent home workers, and forced organizations to rethink how jobs could be performed remotely. Countless offices were left empty and countless facility managers were left managing empty spaces. Fast forward 18 months and a (re)migration to the office is in full force. But how do organizations rebuild the office culture when so much has changed?

The (previous) trend of open concept seems counter-intuitive to the notions of social distancing, not to mention a sanitization nightmare, but the answer is in a holistic approach to retaining flexibility for workers, and more importantly for the building itself such that the space  can adapt to a future that is still being shaped. Organizations are faced with a new set of priorities that include more than just annual productivity. The health and wellbeing of employees, a collaborative workplace, cost-effective growth, and a responsibility to the environment are rising trends that are shaping the workspace.

The open concept, for offices and similar building uses, stems from the early 2000s during the tech boom, when larger companies left behind the cubicles and private offices for an attempt at open collaboration. The result was a less secluded workforce, one in which the emerging technologies could be employed at and during work. The computer shifted from a desktop that confined a worker to a specific location with its large towers and connected monitors, to a laptop that allowed the worker to seek different desirable spaces to work throughout the day. Offices cleared out the cubicles and tore down walls to create barrier-free spaces in which breakout meetings, collaboration, culture, and health became the focus of a workforce now well-educated in technology and demanding a different office than their parents.

The year 2020, once seen as the attainable future with electric cars and drone deliveries, was instead an almost lost year of isolation that witnessed the revelation of the home office and an up-tick in screen time. The world has changed and that the office, and work-life in general, should reflect this change. Companies are adopting hybrid workspaces that allow for social distancing but also for flexibility for employees as we all navigate an uncertain future. As it turns out, the open concept and its inherent flexibility results in a perfect platform for the evolving building and workforce.

If the open concept allowed for the flexibility of its workers, early renditions created nightmares for the logistics of how to design, build, and maintain these (new) wide-open spaces. Open floor plans do look pretty in plan, as the lack of walls present infinite opportunities for desk configurations and natural light. In contrast, the executive desks and high-back chairs of a private office have no place in an open setting; the structure of the building became undoubtedly more complicated as the removal of walls (and associated structural supports) meant larger spans and deeper beams; and, the lack of walls also posed an issue of where to run plumbing and electricity. While no walls meant more light deeper into the space, the glare on computer screens and the amplified noise presented another problem for the workers. In a practical sense, where did all of the storage go?

The lifespan of the open concept has seen answers and responses to these initial problematic results of knocking down barriers – both in the literal walls and in the metaphorical office hierarchy. Interior designers developed modular furniture that could be rearranged to host different functions and delineate different types of space by use. Moveable partitions allowed for the dichotomy of private and public spaces. Engineers devised structural systems that could withstand the large spans while accommodating other trades like mechanical, electrical, and plumbing systems in their midst. Architects used the necessary columns to divide space, and designed buildings with a core for vertical circulation of inhabitants and mechanical/electrical/plumbing systems, as well as for housing storage. Workspaces began to flow around the periphery with access to daylight and ventilation, now better controlled by updated glazing and shading systems. The open concept proved to be as functional as it was innovative.

In essence, the building responded to the needs of the user. The building adapted, but it was a process of learning by the designer and the owner. The ability for a building to truly adapt to the inhabitants extends beyond the day to day activities and requirements. The holistic approach considers not just the trending office culture, but also the future usage of the building and its materials. Thought of in two distinct fashions, the building can be simultaneously perceived as a living entity that will likely outlive its designers and builders, and also as a sum of parts that each play a role in its daily function and in its future. The owners and designers being receptive to the demands of the open concept allowed the building to adapt as a whole – it is now basically as open as it can be. But what of the parts of a building?

Mechanical engineers are devising mechanical systems that integrate with the local microclimate to provide heating and cooling on an as-need basis. New window systems (smart glass) respond to light wavelengths and heat to provide optimal lighting to a space based on activity without the unwanted heat gain (or loss). Within the building, raised floor systems (access floors) have changed the way open offices are both designed and maintained by allowing electrical wiring and HVAC systems to run under a modular floor system that can be accessed at any time.

In the end, there is no going back from the open concept. To convince an owner that less collaboration and more individual, private work is better would be a detriment to the possibilities afforded by a building. However, while the open concept solved many issues in comparison to its predecessor, it presented a unique challenge for designers, builders, owners, occupants and FMs in how to first create and then sustain a functioning building. New demands for flexibility are offering an up-and-coming sector of smart and reusable building products that are at the center of a holistic approach towards the future of space. The buildings of the future are already here, and they can be updated with new emerging products that will allow them to extend their lifespans. 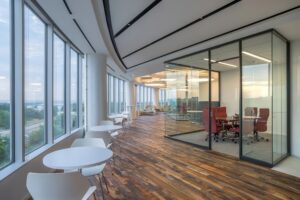 What is the future of workspace? The question really becomes: what is the future of space? A building, a floor, a suite, must actively adapt as a whole to the trends that are more and more about the health and wellness of its occupants. The functioning body of the building is also a conglomeration of parts that each play a crucial role in the overall function. Technological advances have allowed FMs to gain insight into the inner workings of a building by tracking its ebbs and flows. This technology is as much about helping the user as it is about helping the building prolong its lifespan through the automation of maintenance as well as prevention of future problems. It is difficult to pinpoint the exact future of workspace, or predict the next trend, but it is likely a good guess that cyberspace will have something to do with it.

Offices in the future will undoubtedly have to manage employees being logged into other office spaces in far off locations and different time zones. Certain basic requirements like power, lighting and furniture are not likely to disappear anytime soon, so it is safe to bet that where there is need for a workspace, there will be a need for innovative products that allow for such flexibility.

The future of buildings is, then, one of adaptability and flexibility in which the kit of parts can be reconfigured or updated to ensure that the building itself can evolve with the changing needs of the user(s).  The holistic approach grants organizations an opportunity for a transition into the future of space as a result of the pandemic, one in which collaboration, health and well-being, productivity, profitability, competition, and sustainability are harmoniously achieved through a generally happier and healthier workforce and a more adaptable and flexible workspace.

Earl Geertgens is president and CEO of FreeAxez LLC. For more than 30 years his leadership has produced adaptive cabling distribution systems, creating new trends in the built environment.

Here’s how proptech is reshaping the real estate industry, led by data analytics August 9, 2021 In "Surveys and Trends"