Achieving optimal building operations should be one of the main goals of facility owners, managers, and engineers. However, how does one determine optimum conditions? Building Re-Tuning is a form of active building and energy management that can be performed by building operators to ensure occupant comfort as well as efficient energy use.

What is Building Re-Tuning?

Re-Tuning differs from an energy audit or commissioning project, in that the building operator, building engineer, or facility manager is typically performing the re-tuning as opposed to hiring outside assistance. The overall goal of the re-tuning process is not to determine capital projects for possible implementation (although some may identified during the process), but rather what operational changes and small fixes can be made immediately to effectively improve building efficiency and occupant comfort. Re-tuning may include adjusting thermostats for actual occupancy patterns or small low-cost repairs such as replacing a faulty sensor or caulking openings in the building envelope.

The initial phase in the re-tuning process is data collection. Understanding building occupancy schedules, for example, allows comparison of equipment run times to building operations. It may also be useful to have access to at least the last twelve months of building energy use. By performing a heating and cooling degree day analysis (comparing past energy use versus the weather during the time period) one can see if the building’s HVAC energy use properly tracks the outdoor weather. For instance, if a peak in energy use is shown in the spring or fall (aka the shoulder seasons) instead of the winter or summer months, that may mean simultaneous heating and cooling is occurring. Figure 1 shows an example of peaks occurring in April 2010 and May 2011, just as the heating season is coming to an end. 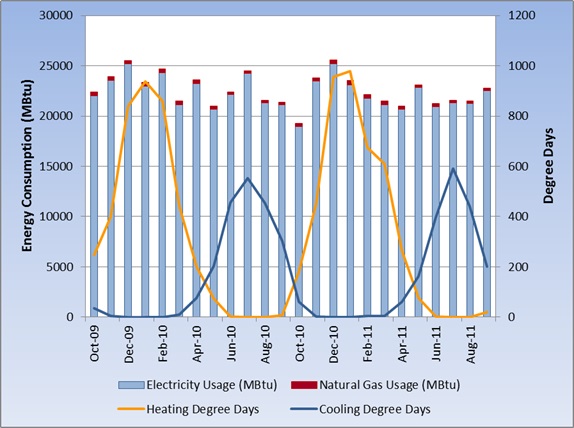 Figure 1. Peaks in energy use in April of 2010 and May of 2011 are indicative of simultaneous heating and cooling. (Source: Facility Engineering Associates)

During the walk-down, any potential source of energy waste should be investigated. These include the building envelope, lighting and lighting control systems, domestic hot water system and HVAC system.

Possible leaks in the building envelope include door seals, cracks in window panes, pipe and duct penetrations, and blocked louvers. Reflective roof surfaces should be checked to ensure they are clean. When clean, a white roof is at its most reflective, and therefore most energy efficient in cooling climates.

Lighting control systems should be investigated for proper scheduling (if applicable) and to ensure that occupancy sensors are provided in locations that make sense such as conference rooms, bathrooms and office spaces. If photo cells are utilized for exterior lighting, they should be checked to ensure they are clean and not located where they are obstructed by landscaping or something else that would cause a false reading resulting in lights be on (or off) all the time.

Domestic hot water systems can be good candidates for savings. Hot water temperature set points should be set as low as possible while still meeting minimum temperature requirements for hand washing and showers. Consider scheduling circulation pumps and electric water heaters to turn off during unoccupied hours and the possibility of lowering set point temperatures during the night and other unoccupied times. And, of course, look for areas of missing insulation and water leaks or drips.

Typically, the majority of a building’s energy savings can be found in the operation of the building’s HVAC system. When performing a building walk-down look for any damaged, missing or disconnected equipment components such as condenser fans, belts, panel doors, actuators and dampers. Check for variable frequency drives (VFD’s) that may have been overridden into manual mode. Areas that feel muggy, overly hot or cool, or that have frequent occupant complaints should be thoroughly investigated.

Building Re-Tuning Can Be Performed on Any Building

The principles of re-tuning can be applied to all buildings, even those without a BAS system. A building’s occupants all act as temperature, humidity and light sensors. Occupant complaints can be an easy way to determine problem areas of a building, and although the complaints may sometimes be attributed to problem people, each trouble call can alert building operators to a potential system problem.

Buildings with a BAS allow for additional data trending and can be very useful for determining operational issues. Optimizing a building’s HVAC system can be difficult, as conditions inside and outside the building are constantly changing. When re-tuning a building’s HVAC system with a robust BAS system, there can be so many points available to trend as to be overwhelming. Deciding on what points to trend depends on BAS capabilities and what is being investigated.

When investigating occupancy scheduling issues, one should trend both the supply fan status and zone temperature vs time. When analyzing the trend data, be on the lookout for a lack of night time and weekend setbacks for heating and cooling set points as well as excessive fan cycling. For zone temperatures, trended data should show 5-10°F deviations from setpoints when setbacks are active during non-shoulder months. Winter zone temperatures should drop down to 60-65°F and summer temperatures should rise to 80-85°F. Fan status should be “off” for all unoccupied times and VAV box status should indicate “Unoccupied”. Chillers, towers, pumps, etc. should all indicate that they are turning off at night if all areas of the building are also shut down.

When tuning an air handler, if you trend outdoor, mixed, return air temperatures, fan status and fan speed versus time you will be able to determine if the air handler is properly scheduled to shut down during unoccupied times, and if unoccupied temperature setbacks are being followed. By monitoring the fan speed in a VAV system, you will be able to tell if the air handler is responding to changes in demand. If there is no change in fan speed throughout the course of a day, it is possible the VFD has been overridden.

Trend graphs of the cooling coil and heating coil valve positions vs. time should show the air handler switching between heating and cooling modes appropriately in response to rising and falling outdoor air temperature. For most climates, there should be one or more times during the day when neither heating nor cooling is running. When outdoor conditions are favorable, the cooling valve should not open until the outside air damper is about 80% open, and similarly, the damper should be at its minimum position when in heating mode. Heating and cooling should never run simultaneously.

The obvious benefit of building re-tuning is energy savings. In a recently released case study, the General Services Administration (GSA) reported that their property managers, building engineers and O&M contractor staff at the Lyndon B. Johnson (LBJ) Department of Education Headquarter and William Bryant Courthouse Annex received building Re-Tuning training from the Pacific Northwest National Laboratory (PNNL) in March of 2014. In the four months since receiving the training, the LBJ building has saved an average of 21.7% on electricity usage and the William Bryant Annex has saved an average of 8.2% on electricity usage compared to weather normalized projected usage. (Figure 2) 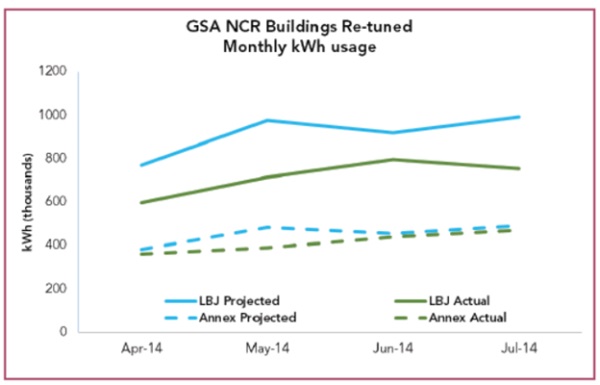 During the course of their re-tuning project, the GSA tightened equipment schedules to be more in line with actual building occupancy patterns, discovered a heating valve stuck open that caused unnecessary energy use, changed transformer room exhaust fans to no longer operate 24/7, and lowered the condenser water set point from 83F to 80F for improved chiller performance. These are just a sample of the no and low cost projects that can lead to large cumulative building energy savings.

The strategy and proper mindset when approaching a building re-tuning can be summarized in three key points.

The items discussed in this article are just a small sample of what can be found during a building re-tuning project. Additional information and free training materials are available through Pacific Northwest National Labs (PNNL). The Department of Energy funded PNNL to create the Building Re-Tuning Training program. The Consortium for Building Energy Innovation (CBEI) is leading efforts for the DOE to make Building Re-Tuning Training available. See https://www4.eere.energy.gov/workforce/projects/buildings-retuning-training for information about accessing the training. Online re-tuning interactive training and energy charting and metrics tools are available at http://buildingretuning.pnnl.gov/. Separate training modules are available for both building with and without a BAS system.

Facility Engineering Associates, P.C. (FEA)  is an engineering and facility management consulting firm supporting owners and managers of existing facilities. FEA was founded in 1992 on the principle that there is a better way to manage the built environment by balancing the challenges of providing a safe, secure, and healthy environment; maintaining an aging infrastructure; and improving how the FM organization operates. We help our clients improve the way they manage, operate, maintain, and fund the built environment to enable facilities that are safer, healthier, resilient, productive and cost-effective.

*The information above is for general purpose only and subject to copyright protection.