by Shane Henson — June 25, 2014—The U.S. Department of Energy (DOE) recently released a free, open-source, standard software application for the management of building performance data. The Institute for Market Transformation (IMT) is a SEED Team Member, along with the Lawrence Berkeley National Laboratory and software developer Building Energy, Inc.

Called the Standard Energy Efficiency Data (SEED) Platform, the software allows users to share large amounts of data on the energy performance of buildings. Three cities—the District of Columbia, Philadelphia, and San Francisco—have already confirmed they will use SEED to manage the data collected through their energy benchmarking and disclosure programs. 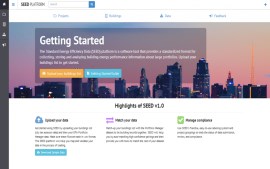 The DOE’s new software application and corresponding Web site will help organizations easily manage data on the energy performance of large groups of buildings.
(Click on image to enlarge)

“SEED represents a big step forward for building energy data,” said Cliff Majersik, executive director of IMT. “As more cities and counties adopt energy benchmarking laws, they are gathering robust new data on energy use in buildings—but until now, there wasn’t a robust, free, and common software application they could use to store, share, and analyze it. SEED will not only save staff time and aid in ensuring that data is high quality, it will facilitate collaboration among cities and stimulate innovation by software developers. We’re pleased yet not surprised that the District of Columbia, Philadelphia, and San Francisco have already signed on to use it, and expect more cities to follow.”

SEED will significantly improve the ease and speed with which users manage building energy data, the DOE says. Because it provides a common format, it enables easier sharing and comparison between datasets as well as standardized third-party applications. It allows management and storage of data from multiple sources about the same buildings, and permits collaboration among jurisdictions or other selected external parties.

The core SEED code is open source, so anyone can add on to or modify the software. This makes it vendor-neutral, and allows almost unlimited flexibility to add features for collecting new information and utilizing or visualizing building energy data in new ways, the DOE says.