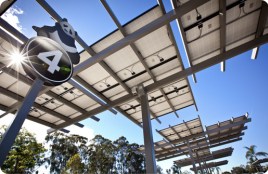 The charging station was made possible by Smart City San Diego, a collaboration that combines the resources of San Diego Gas & Electric (SDG&E), the City of San Diego, General Electric, the University of California—San Diego, and CleanTECH San Diego to drive projects forward that improve the region’s energy independence, reduce greenhouse gas emissions, and assert San Diego as a clean energy leader.

One of the first of its kind in the country, the “Solar-to-EV Project” harnesses energy from the sun to directly charge PEVs, store solar power for future use, and provide renewable energy to the electrical grid, says Smart City San Diego. The project incorporates 10 solar canopies producing 90 kW of electricity—enough energy at peak capacity to power 59 homes—as well as five EV charging stations, with one station located in a nearby ADA-accessible parking space.

Using new battery technology, a 100-kW energy storage system is charged by the solar canopies and used to offset power demands on the grid to charge the vehicles. When the battery is full, the excess solar energy that is generated is put onto the electric grid to improve reliability and benefit the surrounding community. The solar canopies also provide shade to approximately 50 cars in the zoo’s southeast parking area.

According to Smart City San Diego, the clean energy produced by the Solar-to-EV Project is equivalent to removing 189,216 pounds of carbon dioxide from the atmosphere each year, or the same as planting 2,788 trees annually. For additional comparison, the greenhouse gas emissions savings from the electricity produced is equivalent to removing 21 cars from the road each year. Furthermore, PEVs, when driven on electricity, are said to produce zero tailpipe emissions and no emissions overall when the electricity is directly from solar power.

See how you can optimize your HVAC use based on real-time occupancy, with this new partnership August 18, 2021 In "Products and Services » Software & Technology"