Catering in the workplace is much more than the convenience of ‘grab and go’. For many organisations, investment in cafe and restaurant facilities is an integral part of its employee attraction and retention strategy, and a key component of a flexible working environment providing convenient and attractive networking locations.

Employee expectations are growing. They want good coffee and food sourced from sustainable suppliers. Where high street brands are part of the food offering, they want it to be competitively priced — or cheaper — than outside the workplace. They want catering to be available from the moment the doors open often until well past the end of the normal working day, and providing light snacks through to fine dining.

Caterers also often need to invest in the facilities to not only rebrand but also to build footfall — essential for a profitable operation. Now, with sustainability targets caterers are also required to focus on minimising energy use and costs, waste, food miles and more. 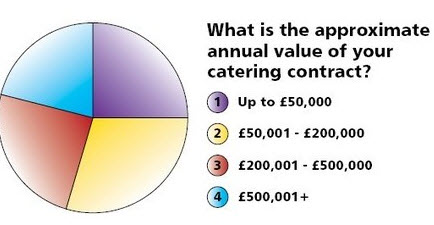 It is a tall order for caterers to maintain quality and innovation when margins are under pressure. Nevertheless, the vast majority of our respondents rated their caterers performance at ‘average’ or ‘good’ overall.

PFM has been working with the FCSI, the organisation for independent catering consultants, to understand how FMs can improve the management of their catering operations and cut costs. Our survey reveals that catering is a key responsibility for FMs.

Some 66.1 percent of respondents to the survey were in organisations employing more than 500 people. Some 72.4 percent were public sector organisations. Restaurant facilities are offered by 72.9 percent of them, half at one site only, and 42.6 per cent at 2-5 sites. The vast majority also provide vending facilities. Asked how many staff are located at their organisation’s main facility, some 67.2 per cent said that more than 300 people were located there.

Of our survey respondents, 76.3 percent outsource their catering operations, and of these 87.2 percent do so directly to a specialist caterer. Of those whose catering is delivered as part of a total FM or bundled FM services package, a surprisingly large number — 42.6 percent — are considering changing to a single service catering contract and not part of a ‘bundled’ contract.

Catering contracts used to be renewed on a annual basis but in recent years there has been a trend towards building longer relationships, and this is reflected in our survey. About 72 percent have contracts of more than three years, and of these 28.3 percent have contracts of five or more years. Some 86 percent of respondents said they met their catering contractor’s representative formally to review performance against KPIs and SLAs, with the majoirty (72.7 percent) meeting monthly and 15.9 percent meeting quartlerly. Those who only meet annually account for just 2.3 percent, and the same number never met their caterer’s representative at all.

Subsidies are applied by 68.4 percent of respondents’ organisations, and 91.4 percent said they knew how the catering costs are made up. However, a large proportion — some 63.6 percent did not know how much energy their catering operations use, and 54.5 percent declared that they were not working with their caterer to reduce the volume and cost of energy consumed.

Asked if independent advice on managing catering operations had been sought, the vast majority of respondents (61.8 percent) said they had not sought advice. However, those that had said this had been for contract negotiations (57.1 percent) and benchmarking (52.4 percent) with 38.1 percent seeking advice on kitchen and restaurant design and 28.6 percent for ongoing monitoring.

Increasingly caterers invest in client facilities as part of their contract. Upgrading and modernising facilities can improve take up of catering services particularly when contracts change from one caterer to another. Some 46.8 percent of respondents reported that their caterers have invested in their facilities, spending up to £100,000 (82.6 percent). Most investment has been on the servery (58.3%) and kitchen equipment (50 percent), and seating and decor(29.2 percent).

Asked how satisfied they were with their catering contractor, the majority of respondents said they were good (42.6 percent) but a similar proportion (40.4 percent) said their were average or below average. The most ‘Average’ performance scores were recorded on service, sustainability, contract management, transparency and staff satisfaction, while most ‘good’ performance scores were recorded for on costs and food quality.

Cost and staff satisfaction rated highest among respondents as the most important attributes when selecting a contract caterer. Following closely behind with 45.8 percent each is a requirement to work with organisations to achieve their sustainability goals such as local sourcing of food and healthy eating agendas, and to offer an innovative approach to catering operations.

Are you a building engineer looking for a peer? Join the AFE November 4, 2021 In "Associations and Organizations"

The pandemic has accelerated these trends and challenges in higher ed facilities, say APPA and Gordian April 19, 2021 In "Surveys and Trends"